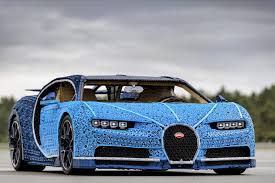 Lego Makes Life-Size Bugatti which can be Driven

Using over 1 million plastic blocks, Lego managed to make a life size functional Bugatti Chiron. It was even one that could be driven and was tested out at a track in Germany. The painstaking task took 13,000 hours. When viewed from a distance, the replica fashioned from Lego bricks looks just like the real car. Lena Dixen, Senior Vice President of Product and Marketing at the Lego Group, said in a statement the life life-size model of the Bugatti Chiron marked a first in many ways. It even has real Bugatti Chiron wheels.
The Lego model was first test-driven in June and was publicly launched at the recent Grand Prix Formula 1 event in Monza, Italy.

The Lego model weighed 3,300 pounds and was designed and made by the very same Czech Republic-based team that makes creations for Legoland attractions. The vehicle was built from scratch by hand, with each Lego piece being connected to the next without using any glue. The team used 339 types of Lego Technic elements, and even used a special tool made out of Legos to put some pieces together.

“For over 40 years, Lego Technic has allowed fans of all ages to test their creativity with a building system that challenges them to go beyond just creating new designs, to also engineering new functions,” Dixen said.

Lego Technic is a range of Lego products comprising interconnecting plastic rods and parts for the purpose of building advanced models.

The model does have some material that is not from Lego, including a steel frame, for structural stability and safety and to support the weight of the car. The original Bugatti Chiron wheels are of course non Lego material as are the brake system which has been taken from a go-cart and the power steering sourced from an ATV.

The frame also has a roll cage and four steel plates were added under the chassis to lift the car for maintenance and transportation. Nevertheless, 90 percent of the vehicle is made out of components from Lego.

Equipped with a rear spoiler, speedometer, front and back lights, detachable steering wheel and brake pedal, all fully functional and built of Lego Technic elements, the model is a dream come true for any Lego fan,” Lego said in the statement.
The Lego model is electrically powered, thanks to two batteries, over 2,300 Lego power function motors and over 4,000 Lego gear wheels that which are used to supply power to the vehicle. The vehicle does not have an accelerator as the speed of the model is linked to the output voltage of the motor.

The team decided to test drive the Lego model on the same track where the original Bugatti Chiron was tested, in Wolfsburg, Germany. Of course, the Lego version came nowhere near the original Chiron’s top speed of over 200mph, but it did manage to reach 12mph. The car was first tested by former Le Mans winner Andy Wallace in June.

“When I first saw the Lego Chiron, I was immediately impressed by the accuracy of the model and the minute attention to detail,” Wallace said in the statement.