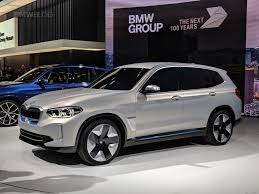 BMW has already started taking orders for its first electric SUV, the iX3, though it is planning to launch the vehicle only after two years. The other major German automakers, Audi and Mercedes-Benz are already ready to launch their new electric SUVs. Like them, BMW plans to market its electric SUV first in Norway. Norway is a market in which consumers have taken readily to electric cars and the country broke a record in June this year, when electric cars accounted for 42 percent of new car sales, with the Tesla Model X proving to be particularly popular.

Norwegians who are interested in buying the iX3 SUV have been requested to reserve a vehicle by putting down a deposit of 15,000 kroners which is equivalent to USD 1,800 USD, though BMW still has not announced what the final price of the vehicle will be.

According to BMW, the model will be manufactured in China and will be exported to overseas markets.

BMW had unveiled the concept vehicle on which the iX3 will be based back in April and had said that it would offer a range of over 400 kilometers in the WLTP cycle. The vehicle will run on a high voltage battery having a net capacity exceeding 70 kWh and producing a maximum output of 200 kW/270 hp. Charging will be relatively quick compared to other models as it will be able to take a charging rate of up to 150 kW.

It looks like BMW will face stiff competition from Jaguar and Mercedes-Benz who are also planning to launch their very own electric SUVs shortly in the Norwegian market.