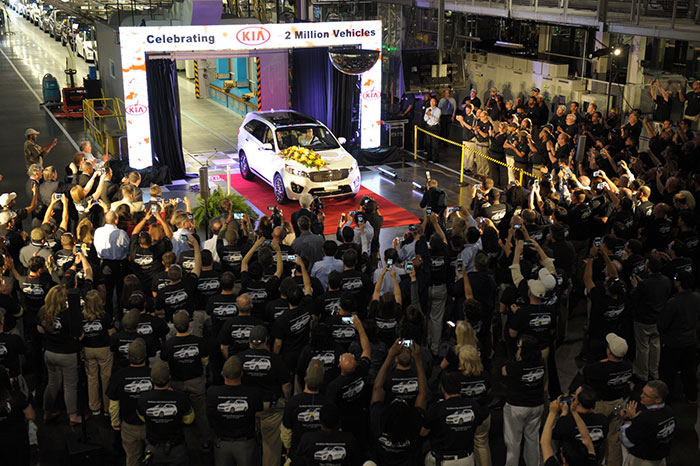 Kia’s production facility in the United States, Kia Motors Manufacturing Georgia, Inc. (KMMG) celebrated an important milestone when the plant’s two millionth vehicle, came off the production line in West Point, Georgia. The vehicle is a white 2016 Sorento SXL and highlights Kia’s success in the US market.

Kia Motors invested over USD 1.1 billion to set up the factory in West Point back in 2009. The first vehicle came off the assembly line on November 16, 2009 the plant has come a long way since, currently accounting for over 40 per cent of the demand for Kia models in the United States.

Commenting on the achievement, KMMG President and CEO Hyun-Jong Shin said that assembling two million vehicles in less than seven years is indeed a spectacular achievement, and one in which the entire team at the plant can take great pride. The plant specializes in Sorento CUVs and Optima midsize sedans and he said every vehicle attests to the team’s hard work and commitment to excellence.

In addition to direct employment at the plant, KMMG along with its onsite suppliers and local suppliers has contributed over 15,000 jobs in the West Point community and achieved the status of being recognized as one of the top five vehicle assembly plants in the U.S.in the most recent Initial Quality Study conducted by J.D. Power.

Speaking about the achievement, the Governor of the state of Georgia, Nathan Deal said, “Together, Kia and Georgia have a strong reputation of success. The company’s continued investment in the state speaks volumes to our pro-business atmosphere, and we will continue to support them as they grow here. I want to congratulate Kia’s team members on this accomplishment.”