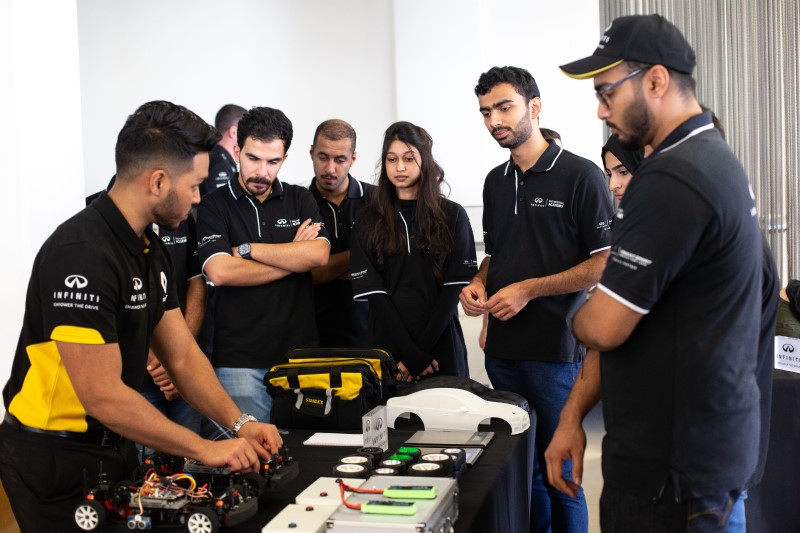 As part of Infiniti’s search for the best engineering talent in the world, the premium automotive brand has announced the names of the 10 finalists from the Middle East for the 2019 edition of the INFINITI Engineering Academy. These 10 finalists will now compete for a unique prize, a one-year placement with INFINITI and Renault F1® Team. The final event will be held tomorrow in Abu Dhabi.

The 10 finalists were selected from 329 applications from the region after clearing a rigorous application process. They were selected based on their performance in a series of tests and interviews that were held to assess parameters like their engineering knowledge, their passion towards the automotive and motorsport industries, and their soft skills.

Yusra Alkendi and Abdul Shahid will represent the UAE, whilst Zeyad Budair will compete from Bahrain. The students from Lebanon will be participating in the INFINITI Engineering Academy for the first time and the finalists include Reem Outa, Daniel Hilal, Samir Issam Rahal, Sleiman Al Masri, Fouad Atwai, Raoul Al Samarani, and Mohamed Takkoush.

Commenting on the academy, Lebanese finalist, Daniel Hilal said that he was excited to participate in the sixth edition of the INFINITI Engineering Academy as the automotive sector in general and F1® in particular was a personal passion of his.

Hilal added, “It is really great to have a premium automotive brand support the next generation of engineers from the Middle East follow their dreams into the motorsport and automotive industries.”

During the finals, these brilliant engineering students will face a challenging judging panel comprising senior engineers from both Infiniti and the Renault F1® Team as well as a professor from Harvard University. The finals will involve competing against each other in a series of individual and group challenges. These challenges will serve as a test not only of their engineering knowledge, but also of their personality, their strategic thinking, their communication skills and their ability to work well both as individuals and in a team environment, as well as their capability to make intelligent decisions under pressure.

“The INFINITI Engineering Academy is now in its sixth consecutive year. We have seen a promising increase in the caliber of applicant’s year-on-year, which is an exciting indication for the future of the automotive industry in the Middle East.” said Markus Leithe, Managing Director, INFINITI Middle East.

“We’re incredibly pleased to see successful participants from the Middle East go on to have flourishing careers in engineering and, as a brand, INFINITI will continue to empower the future talent pool to innovate and succeed. We congratulate the 10 finalists who have made it through to the next round, where the real challenging tasks now begin, and wish them the best of luck in the Final,” he added.

The finals of the Infiniti Engineering Academy 2019 edition will be held at the Mussafah Infiniti dealership in Abu Dhabi.

The winner from the Middle East will be offered an internship of six months in the UK in motorsport engineering at the Renault F1® Team Technical Centre (Enstone) and six months in automotive engineering at the INFINITI Technical Center Europe (Cranfield). All expenses related to travel, and accommodation will be covered and the winner will also get access to an INFINITI company car, a competitive salary and the possibility of work along with world-leading engineers in the automotive and motorsport industries.