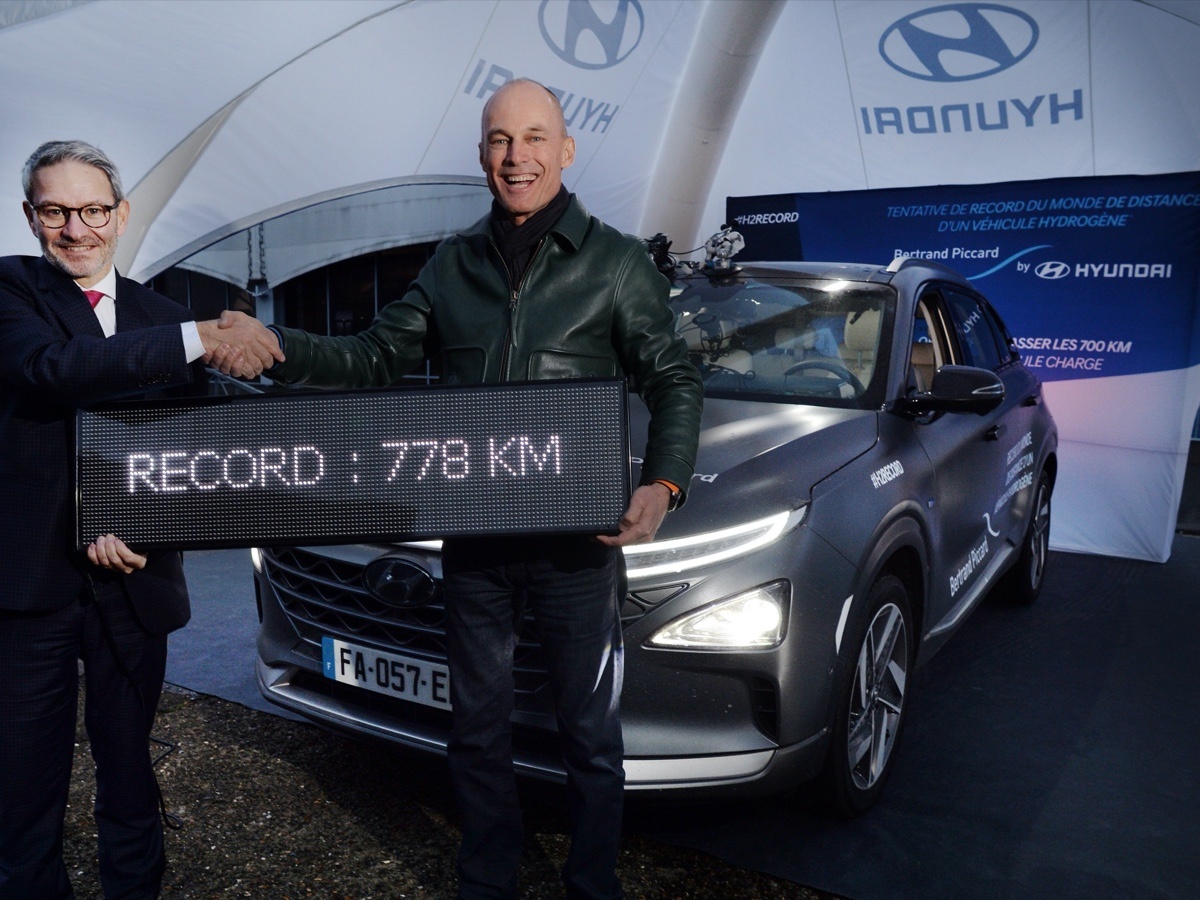 Hyundai once again highlighted the capabilities of its hydrogen fuel cell vehicles with a new record that was achieved by a Hyundai Nexo. This further enhances the public perception of the viability of hydrogen fuel cell technology in the broader context of zero-emission vehicle technologies of the future.

The record feat was achieved in a Nexo SUV. The vehicle broke the world record for the longest distance traveled in a hydrogen-powered vehicle on a single tank. The vehicle covered about 484 miles in a journey across France and even exceeded its own projected range.

Bertrand Piccard, a Swiss aeronaut, balloonist and environmentalist who has been in the news as the founder of Solar Impulse, the first round-the-world solar-powered flight, was chosen to helm the Nexo for the record breaking attempt. Piccard has also made the first nonstop balloon journey across the globe without fuel in 1999 aboard the carbon-composite Breitling Orbiter 3.

“With this adventure, we have proven that with clean technologies, we no longer need revolutionary experimental prototypes to break records,” Piccard said. “Everyone can now do it with standard zero-emission vehicles. A new era in performance is beginning, for the benefit of environmental protection.”

Earlier in 201, Hyundai had nominated the Nexo to undergo full crash testing by the Insurance Institute for Highway Safety in the US, thus making the model the first hydrogen fuel cell vehicle to be evaluated by IIHS. It performed outstandingly in the tests, earning a Top Safety Pick+ award.

Using its advanced air purification system that filters out very fine dust, Hyundai said the Nexo purified the same volume of air breathed by 23 adults each day during the trip. A combustion engine powered vehicle would have emitted around 245 pounds of CO2 during the same trip, according to Hyundai.

Hyundai does want to draw attention to hydrogen as one solution for sustainable mobility. Back in 2012, Hyundai had made what it called the first production hydrogen fuel-cell vehicle that was available for lease in the form of the ix35 Fuel Cell crossover. It has recently unveiled its retro-inspired HDC-6 Neptune, a fuel cell-powered semi-truck concept, indicating that it might be working on a fuel-cell commercial vehicle.