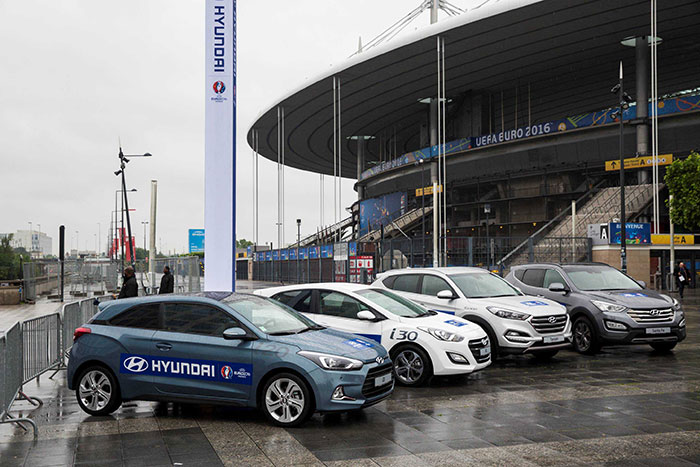 Within Europe, Hyundai set up Fan Parks in major cities to give thousands of supporters a place to congregate and voice their support for their favorite teams in the month long tournament. The company also used its digital platforms to share its passion for football with fans across the globe.

Speaking about its support for UEFA Euro 2016, Mike Song, Head of Hyundai Africa and Middle East Region said that though the tournament is meant for teams from Europe, it is one of the most anticipated football events for football fans on a global basis as some of the most renowned national teams are participating in the tournament. This is why Hyundai made it a point to support the effort of fans to watch the Euro 2016 games in different places across the world.

Under the tagline ‘Real Fans First’, Hyundai Motor planned many activities to enhance the fervor of fans in the period leading up to the EURO 2016 kickoff. One of them was the innovative Digital Fan Park, which was launched in April 2016, which allowed live streaming of the games through the digital platform http://euro2016.hyundai.com. The UEFA EURO 2016 Hyundai Predictor game was launched on http://europredictor.uefa.com/ to give fans a chance to win prizes by predicting the winners of games during the tournament. Hyundai Motor also created and ran online videos to build up the level of anticipation in the period leading up to the tournament. The first video ‘Euro 2016 is coming’ proved to be a viral hit with over 34 million views on YouTube (http://youtube/bJ0yLPMpeFU), while the second video ‘The Wait’ was uploaded on June 1.

As part of the sponsorship agreement, the national team buses will be distinctly branded with the Hyundai Motor logo and feature each country’s team slogan chosen through the ‘Be There With Hyundai’ campaign held at http://www.uefa.com/uefaeuro/be-there-with-hyundai/index.html in the run up to the tournament.

In the buildup to UEFA 2016, trophy tours were held in 12 cities across France and the tournament’s sponsors including Hyundai set up UEFA Fan Zones in the cities of Paris, Lyon, Marseille, Lens and Toulouse as well as in other European cities including London and Prague for fans to watch the game in a spirit of camaraderie in real time.

As an Official Partner, Hyundai Motor has played a key role in providing official vehicles for national football teams, players, officials and guests as well as staging various events and promotions in support of the competition.