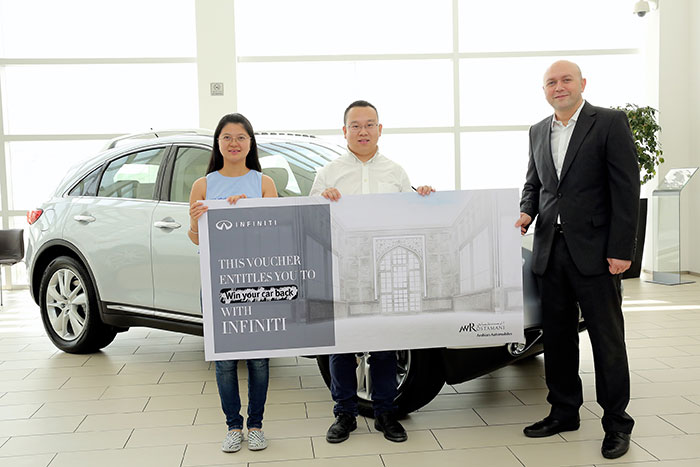 The Li family emerged as the first winners of a special Ramadan promotion held by Arabian Automobiles Company, the flagship company of the AW Rostamani Group which is the sole dealer for Infiniti in Dubai, Sharjah and the Northern Emirates. They purchased an Infiniti QX70 at the Infiniti Center (IREDI) and became eligible to participate in the ‘10% Down Payment on us and a chance to get the value of your car back’ campaign. They got a scratch and win card and immediately received the full value of their Infiniti QX70, as part the Ramadan promotion.

Speaking about their win, Mr. and Mrs. Li said that they were absolutely thrilled and were not expecting such a wonderful surprise. They had been planning to purchase an Infiniti QX70 for quite some time and felt that their decision to buy the vehicle paid off.

Other benefits customers get if they buy Infiniti vehicles during Ramadan include the total assurance package from Arabian Automobiles Company which two years complimentary service, one year complimentary insurance, and a five-year extended warranty.

Arabian Automobiles is running this promotional Ramadan offer for its complete range of Infiniti models at all its showrooms across Dubai, Sharjah and the Northern Emirates. Showrooms will be open between 09:00am to 3:00pm and from 8:8:30pm to 11:30 am during the Holy Month.