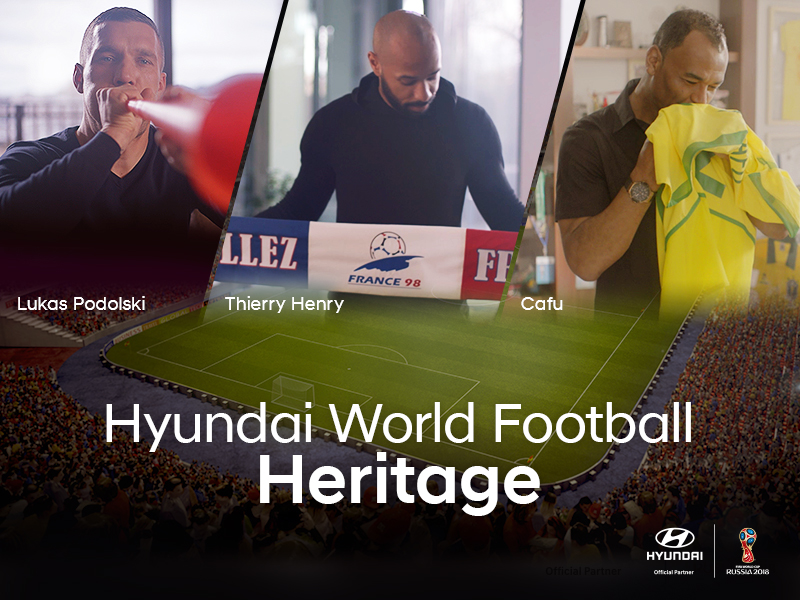 Hyundai Motor Company, which is an Official Partner of the 2018 FIFA World Cup Russia will give football fans across the world a chance to attend the final of the 2018 Fifa World Cup with its “Hyundai World Football Heritage” contest.

Renowned footballers Thierry Henry, Lukas Podolski and Cafu were featured in a series of viral videos Hyundai created to celebrate the fan contest. In the videos, these stars paid homage to the heritage of their respective national teams and gave a playful take on the cheers of the past, when these players were very much a force to reckon with on the field.

Those who win the contest will have a chance to visit Moscow on an all expenses paid trip and watch the final of the 2018 FIFA World Cup Russia. Fans should submit their World Cup related stories with hashtags (#myfootballheritage) in SNS channels or through Hyundai Motor’s official webpage (worldcup.hyundai.com) until May 13. The 32 winners of the contest will be revealed on the website later on, earning the chance to visit the final match of 2018 FIFA World Cup Russia. Their individual heritage and cheering cultures will be exhibited in Hyundai Motorstudio Moscow selected from the FIFA World Football Museum.

Those who take part in the contest need to submit online entries for their national team based on their country of origin. Hyundai has created an interactive microsite for displaying each of 32 qualified country’s best online entries. Those who wish to participate in the contest can ‘worldcup.hyundai.com’ for more details.

Football fans will be able to enjoy the 2018 FIFA World Cup Russia through Hyundai’s new program that makes matches accessible via a digital platform. This platform will serve to connect fans and enhance their experience during every moment of the global football event. Earlier, Hyundai Motor had set up the Hyundai Fan Park for everyone to enjoy the event by cheering his or her national football team, but from this year, the company will reach to a lot more global fans with a good use of digital platforms and SNS.

In addition to the contest, Hyundai Motor will be providing test drives and conducting slogan submission contests to give fans chances to share in the excitement and passion associated with the event.

“We are very excited to invite football fans to take part in this competition, and particularly those fans whose national teams will be representing Africa and the Middle East regions in Russia,” said Hyundai’s Africa and Middle East Head of Operations, Mike Song. “As the FIFA World Cup™’s Official Automotive Partner, we are committed to supporting international football, and we are committed to supporting the fans with the chance to win this extremely special experience.”

Hyundai began its association with FIFA in 1999 and will continue to be a top-tier sponsor of FIFA as the Official Automotive Partner until 2022.