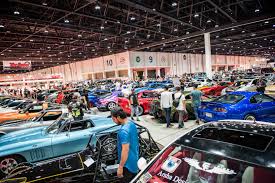 Billed as the largest show focusing on custom cars and bikes in the Middle East, the fourth edition of Custom Show Emirates (CSE) which is scheduled to be held in Abu Dhabi from April 5 to April 7 is expected to draw over 30,000 visitors. The event will be held at the Abu Dhabi National Exhibition Center in Abu Dhabi and will feature over 17 exciting onsite activities, including 4 totally new ones. These include Toyota Obstacle Course, Live Stainless-Steel Welding (Exhausts), Live Leather Works & Airbrush Land.

Nasser Taqi, Partner, Custom Events, UAE said that the organizers of the show were particularly excited about three things for this edition of the show. The first is having renowned Airbrush & Pinstripe artist Danny SchrammWerk coming all the way from Germany for a special paint show. This will also be the first edition of the show in which SEMA USA pavilion will be open to public. Another first-time participant is Motor Bike Expo Italy, which will plenty of exotic custom bikes sourced from all over Europe for display.

The show will be attended by top executives from international partner events who are will be coming from all parts of the world like SEMA USA, Sand Sport Super Show USA, Nippon Auto Parts Aftermarket Committee (NAPAC) Japan, Tokyo Auto Salon and Motor Bike Expo (MBE) Italy.

J. Harley Staniforth, Foreign Relations, Motor Bike Expo, Italy said that Motor Bike Expo was very excited to participate at the Custom Show Emirates 2018 show. He said that both the main organizers of the Motor Bike Expo in Italy, Paola Somma and Francesco Agnoletto, would be available at CSE to network with companies and organizations, and to interact with the public, and to share the first announcements regarding the next edition of MBE. They would also explore new means of strengthening and continuing their partnership with Custom Show Emirates.

The exhibitors at the show who would be coming from all parts of the world like China, Russia, Italy, Switzerland, India, Australia, New Zealand, India, Japan and several GCC countries would be using the show to showcase the latest technologies, products and services in the field of auto customization.

Takahiro Kataoka, the Managing Director of Kuhl Racing in Japan said that the company received so many orders at the 2017 edition of the event that it decided to open its own showroom in the UAE, under the brand name ‘’Samurai Eagle’’. This year, Kuhl Racing will be flying in three cars which were displayed at Tokyo Auto Salon 2018 Tokyo and Osaka Auto Messe 2018, from Japan specially for CSE and each car can be rightfully called a masterpiece. The UAE market has now become a top priority for Kuhl Racing thanks to Custom Show Emirates.

The 3rd International Motorshow Abu Dhabi will run concurrently with Custom Show Emirates and will feature major automotive manufacturers like GMC, Subaru, Chevrolet, Nissan, Infinity and Renault, participating for the first time will be; Toyota, Lexus, Ford and Borgward in addition to others making their debut in the region.

Custom Show Emirates with its combination of onsite activities and impressive line-up of international exhibitors will be an event that will definitely prove to be a draw for many cars and bikes enthusiasts in the region.