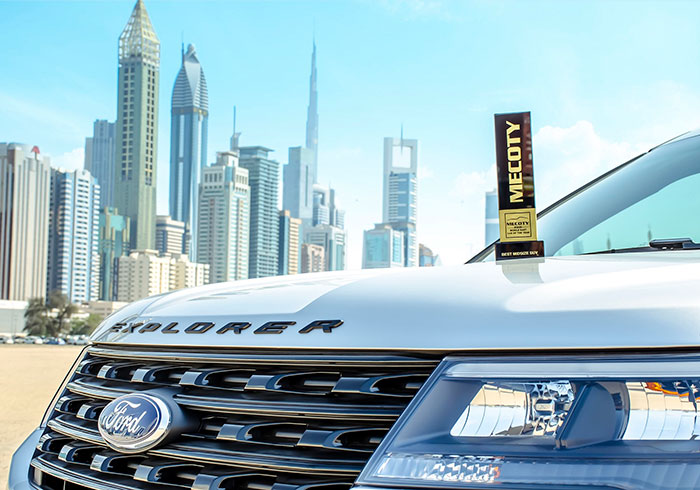 Commenting on the award, Thierry Sabbagh, managing director of Ford Middle East said that the Explorer set the benchmark for SUVs when it was first launched in the 90s and continues to maintain its leadership in the mid-size SUV category with its robust build, convenience, technological features and the comfort it offers.

Based on the industry figures for 2015, the Ford Explorer continued to lead its segment with a 40 per cent market share and sustained this leadership in the first quarter of 2016.

The all new Ford Explorer 2016 not only offers plenty of cabin space but also comes with a bold new design. It has been designed specifically for those who want to express their inpiduality by going on off road adventures but still want to travel in comfort and style.

The most distinctive characteristics of the 2016 model are its rugged design with distinctively high grilles and more powerful LED headlamps, LED foglamps, standard LED low-beams, a new closed-off lower roof rack with channels to channel rainwater away from the vehicle and a new rear spoiler for better aerodynamics.

There are visible heat-sink structures for cooling the LED headlamps. In most models, these ar concealed behind the lights, but on the Explorer, they have been incorporated as part of the the complex headlamp design to showcase Ford’s commitment to innovation.

Ford has also made several changes in the interiors based on feedback from customers and these include little touches of luxury like real buttons instead of touch-sense buttons on the infotainment system and higher-mounted, wrapped and stitched door armrests as well as more attention to detailing throughout the vehicle.

Technological innovations in the all-new Ford Explorer include front and rear cameras with wide angle lenses and washers, a highly refined smart assist feature comprising electronic sensors and electric power-assisted steering for assistance with both parallel and perpendicular parking, smart-charging USB ports both in the front and back of the car to charge all smart devices at a rate that is twice as fast as conventional ports, hands free liftgate that can be opened with a simple kick to the rear bumper, and air curtains to create a high-pressure region over the wheels and tires in order to minimize drag

For the base, XLT and Limited models, the Explorer is equipped with a standard 3.5-liter V6 engine while the Sport version is powered by a 3.5-liter EcoBoost® V6 engine.