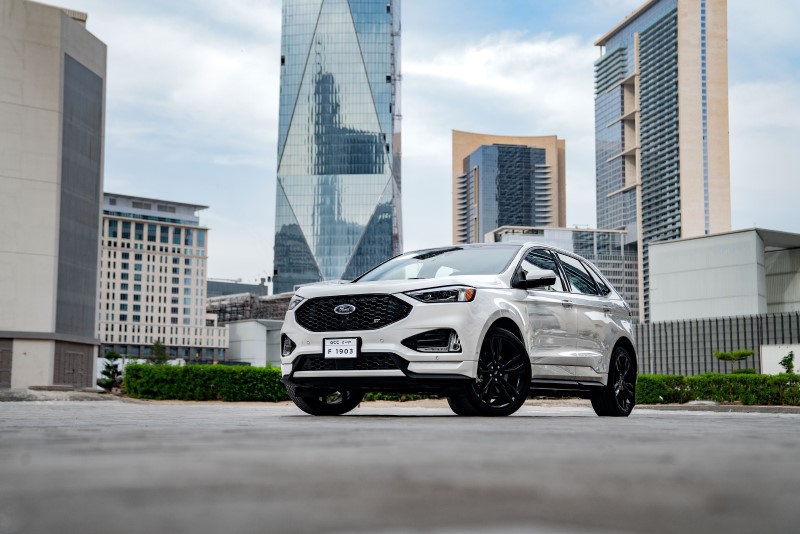 Ford has debuted the all-new Ford Edge ST in the UAE at the retail level. The leading automotive manufacturer thus added the ST brand to its range of SUVs in the country, further boosting Ford’s popularity.

The all-new Edge ST is the company’s first SUV to be tuned by the Ford Performance team and comes with the most powerful V6 engine available in its class – a specially tuned 2.7-liter twin-turbocharged EcoBoost® engine. The engine has an output of 335 horsepower and 515 Nm of torque and has been modified for dynamic handling with a quick-shifting eight-speed automatic transmission, standard all-wheel drive with selectable traction control, an available performance brake package, and ST-tuned sport suspension.

Commenting on the new model, Adriaan Coetzee, Director, Product Marketing, Ford Middle East & Africa said that the all-new Edge ST is positioned as a performance SUV with a track mentality. It delivers a sophisticated driving experience, and an array of new technologies, thus setting a new standard in SUV excellence.

To go with the powerful performance of the vehicle, the Edge ST comes with new front and rear styling, a wide mesh grille for optimal cooling, deep side skirts and dual-exhaust outlets. The unique 21-inch wheels are available as a standard feature and the interior design cues on the steering wheel, seat backs and scuff plates attest to the special quality of the vehicle.

In the 2019 model, the Ford Co-Pilot360, which integrates all the popular, advanced driver-assist features which were earlier available only as separate options into one system is a standard feature. Technologies like the Blind Spot Information System, which uses radar to make the driver aware of approaching vehicles entering their blind spot by flashing an indicator light, and cross-traffic alert, which warns drivers of traffic approaching from the sides when reversing out of a parking spot or driveway, are included. Other technologies available as part of this system include pre collision assist with automatic emergency braking, auto high beams, a lane-keeping system and a rearview camera.

Standard Ford Co-Pilot360 Assist offers evasive steer assist, assisting drivers with steering support to minimize chances of a collision with a slow or stopped vehicle if it is not possible to avoid an accident by braking alone. Lane centering technology, which detects lane markings on the road so that the vehicle stays in the center of the lane is also available. Lane centering makes it possible for motorists to stay in the center of their lane while adaptive cruise control with stop and go capability is enabled. This permits rivers to set a desired speed and distance between themselves and the vehicle in front of them.

Technology for a Connected World

With regard to the interiors, drivers will find a standard wireless charging pad which is nestled in the forward media bin, and a standard 12-speaker B&O PLAY Premium Audio System by HARMAN that has been specially tuned for Edge.
SYNC® with AppLink, an enhanced voice-recognition communications and entertainment system another standard feature and this gives users access to their favorite media content, daily appointments, and the ability to search for nearby points of interest, all while they are on the road. SYNC 3, with an eight-inch touchscreen, is standard on Trend, Titanium, and ST models for enhanced in-vehicle experience.

The new Edge, which is not having the ST badge, comes with a 2.0-litre EcoBoost engine that offers higher levels of power, torque and fuel economy than its predecessor. The engine has an output of  250 horsepower and 373 Nm and is paired with a new eight-speed automatic transmission with Auto Start-Stop technology. The system efficiently turns the engine off when the vehicle is stopped and idling, then seamlessly restarts the moment the brake is released.

A redesigned center console inside the vehicle is further accentuated by an all-new rotary gearshift dial that frees up space, allows easier access to the wireless charging pad and makes the vehicle more stylish and sophisticated.

Externally, the wider grille and freshened fascia further enhance the athletic, modern stance that the Edge is known for. Full LED headlamps are standard, LED fog lamps and signature lighting are standard on Trend, Titanium, and ST and a redesigned hood imparts a wider, more planted stance.