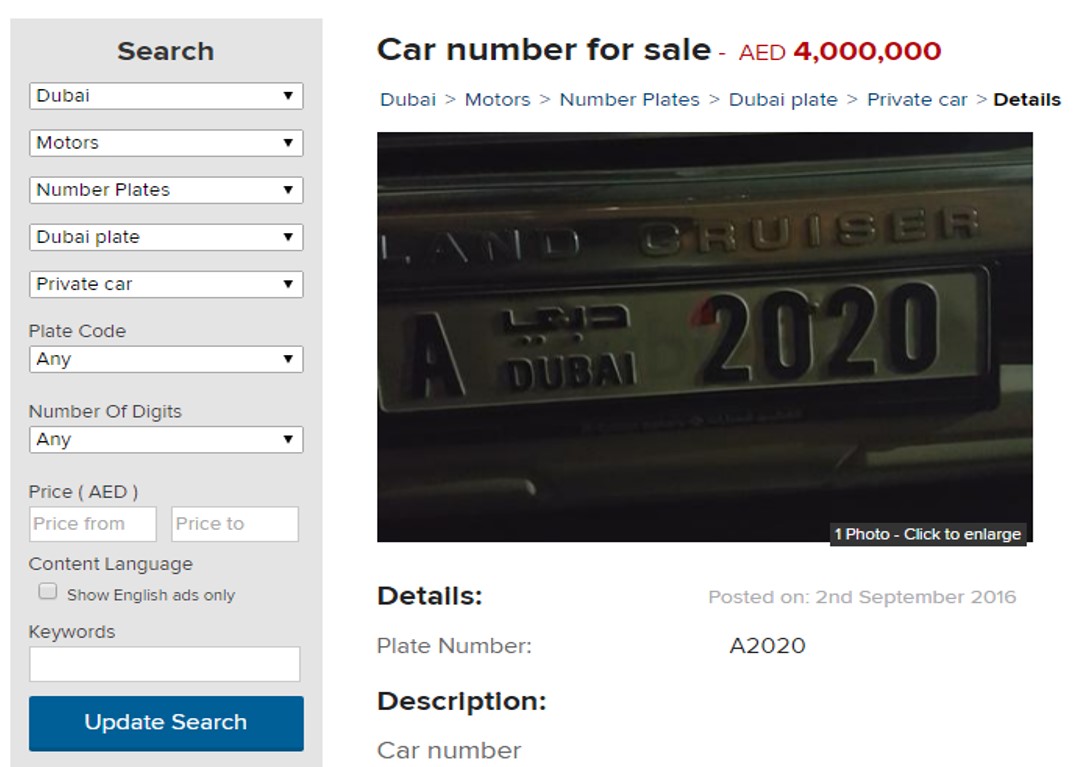 dubizzle is one of the most popular classifieds site in the UAE. Three months ago, dubizzle launched a numberplates section that has proved to be highly successful. Since its launch in mid-July, the category has reached over 4,500 ads with a gross market value of over AED130 million. It also became the second largest category for dubizzle Motors after Used Cars, overtaking the Accessories and Parts sections.

The motors section is one of the most active sections on dubizzle, receiving an average of 1.68 million active users on a monthly basis. The number plates category received tremendous interest with over 100,000 visits in a period of just 30 days. Trasactions are taking place at a fairly rapid rate, with the average time between uploading and deletion of an ad being four days, and pointing to the fact that there is a huge market in the UAE for unique and customized number plates.

Speaking about the success of the new category, Jean-Pierre Mondalek, General Manager Motors at dubizzle said that dubizzle has provided buyers and sellers of number plates with a liquid secondary market, and buyers have the option of actively searching and receiving notifications when their dream plate becomes available. Sellers, on the other hand get a chance to monetize their otherwise illiquid asset. He went on to add that the average asking price per plate is AED 32,000. Several plates with asking prices above AED 1 million have been listed while a 2-digit plate has been listed for AED 7 million.

Over the past three months, the most searched number plate on dubizzle is 786.  In the Abjad or the decimal number system according to which numbers are assigned to letters of the Arabic alphabet, 786 is the sum of the Arabic letters of the opening phrase of the Quran, “Bismillah ir-Rahman ir-Rahim” (in the name of Allah, the most Merciful, the most Beneficent).

The dedicated Number Plates category allows sellers to distinguish their plates by Emirate, plate type, number of digits, and the plate number, thus making the entire process easier for both for buyers and sellers.

“The Number Plates category is all about being local and understanding the needs of the UAE’s motoring community. Distinguished number plates are very popular in the UAE, however are not always accessible. What was previously reserved to those in the know or those that were lucky to have inherited a unique plate, is now available to the wider community through dubizzle,” concluded Mondalek.