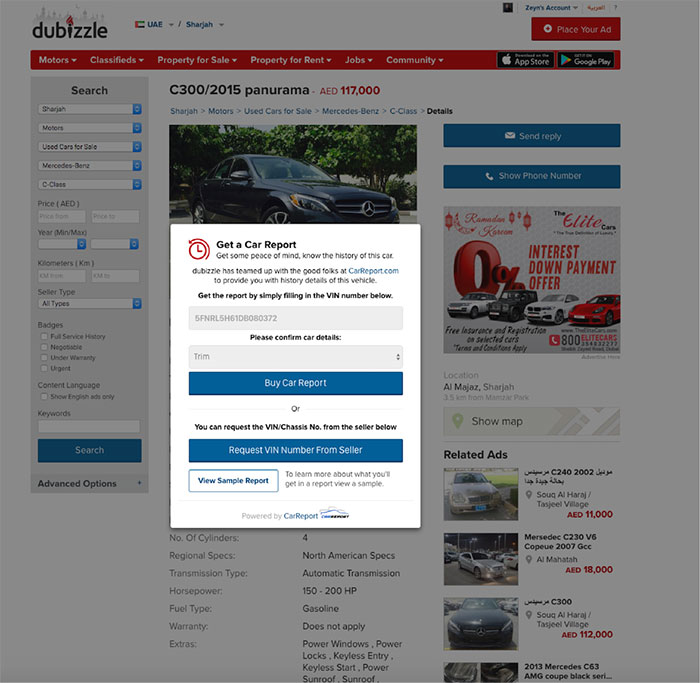 Dubizzle Partners with CarReport to Give Users Reports on Used Cars

One main concern when you plan to buy a used car is the need to learn more about the car’s history. This is why many people prefer to buy used cars from a well known dealership that puts all used cars through a rigorous inspection process. Dubizzle, which is the leading online portal for listing used cars in the UAE has announced that it has entered into an exclusive partnership with CarReport, which is an international, independent information provider on used cars, to provide potential buyers with total transparency.

Thus browsers will be able to access the full vehicle history for all used cars listed on dubizzle. This will minimize uncertainty in the purchase process and help people to buy the model they prefer for a price that is much lower than that for a new car. The motors section of dubizzle currently gets as many as 1.68 million unique visitors per month, with each ad getting about 21 views in the first 30 minutes of it being posted.

Speaking about the collaboration, Jean-Pierre Mondalek, General Manager of Motors at dubizzle said, “Despite the great value used cars offer, many motorists opt to buy new cars as they feel this is a safer option due to the lack of information on used vehicle history.”

He added that dubizzle will now be providing users with additional transparency and confidence through its partnership with CarReport. This will provide the buyer with higher quality leads and simplify the decision-making process.

Sellers of cars can increase the attractiveness of their listing by entering the vehicle identification number (VIN) when posting their ad. This VIN can be used by browsers for generating the vehicle history through CarReport. Buyers can purchase and download this report for 99AED.

Pascal Persoon, CEO of CarReport said that while new cars sales in the UAE are approximately 400,000 cars per year, the sale of used cars generally crosses 600,000 vehicles on an annual basis. Consumers need information about the vehicle’s prior accidents, service history, and values before making a decision. In view of the average value for a used car, which is approximately 55,000 AED, AED 99 is a very small investment to get an in-depth report on the vehicle.

The report is available in both English and Arabic and will give complete details about the number of accidents the vehicle has been involved in, structural damage if any, the mileage, the market value, details of recalls if any and approximate rates for finance and insurance. The report can also be used to ensure that the car’s specifications match those listed by the seller especially in the case of mileage.

The feature is now live on dubizzle and has so far received positive feedback from users, with one user Zul Javaid saying that it was the first time that such a facility is being offered in UAE.