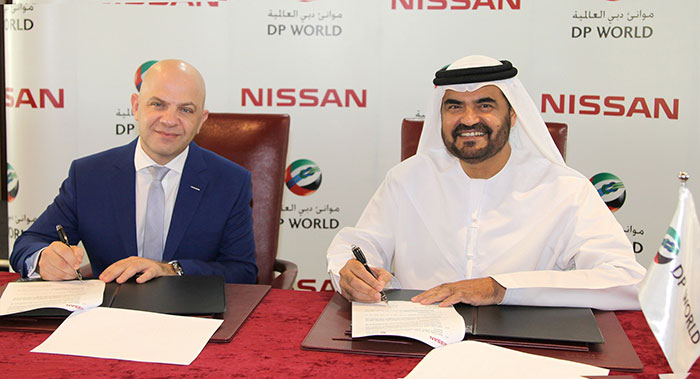 Highlighting its commitment to sustainability in the UAE, renowned Terminal Operator, DP World, UAE Region today signed a Memorandum of Understanding (MOU) with Nissan. According to the terms of the agreement between the two companies, DP World would test the Pathfinder Hybrid at Jebel Ali Port in Dubai, and thus showcase to the wider community in the country the environmental and economic benefits of using hybrid vehicles.

Promoting environmentally friendly initiatives is one of the cornerstones of Dubai’s 2020 vision which is meant to transform Dubai into a smarter and more sustainable city. As part of this effort, Nissan has been strongly highlighting its commitment to innovative sustainable automotive technology and joining hands with local organizations in the UAE to boost awareness about the benefits of using hybrid vehicles.

The MOU, was signed jointly by Samir Cherfan, Managing Director of Nissan Middle East and Mohammed Al Muallem, Senior Vice President and Managing Director of DP World UAE Region, in Jebel Ali, and will involve deployment of two Nissan Pathfinder Hybrids in Jebel Ali port to prove their fuel economy and low emission credentials. DP World will provide updates to Nissan after a one year period regarding the benefits of using hybrid vehicles as part of its fleet.

Samir Cherfan, Managing Director of Nissan Middle East said: “At Nissan we have a clear vision for the future of eco-friendly transportation in the UAE and are big believers in supporting sustainable and fuel efficient driving technology. Following the launch of our Pathfinder Hybrid, we are pleased to be able to partner with DP World to showcase the SUV’s environmental credentials and put its fuel-efficient powertrain to the test. We are confident that it will yield impressive results and look forward to communicating the benefits of the hybrid test with DP World.”

Commenting on the partnership, Mohammed Al Muallem, Senior Vice President and Managing Director of DP World UAE Region, said that the signing of the MOU was in line with His Highness Sheikh Mohammed bin Rashid Al Maktoum’s sustainability vision for Expo 2020. In its role as a premier partner for Expo 2020, DP World firmly believes in the importance of being part of Dubai’s vision to become a Green Economy. The organization’s partnership with Nissan is meant to highlight to the local community the eco-friendly benefits of fuel efficient hybrid automotive technology. He added that he looked forward to learning the impact of the Nissan Pathfinder in helping to reduce the company’s environmental impact and the potential savings it could bring to fleet operations due to use of less fuel.

DP World has a large fleet of vehicles at Jebel Ali Port, which is the ninth largest seaport in the world. Vehicles are used to transport staff between the three terminals and the use of the two Pathfinder vehicles will go a long way in reducing the organization’s carbon footprint.

The Pathfinder Hybrid offers better fuel economy and driving range without any compromise in performance when compared to Pathfinder V6-equipped models. Its large 74 L fuel tank, which is of the same size as that in conventional models, offers a best-in-class range of 785 km on a single tank with fuel consumption of 9.1 L/100km. Also available in four-wheel drive, the Pathfinder has a supercharged 2.5-liter gasoline engine and an electric motor which is paired with a compact Lithium-ion (Li-ion) battery. The Li-ion battery is placed compactly under the third row seat so there is no reduction in space for passengers and luggage.