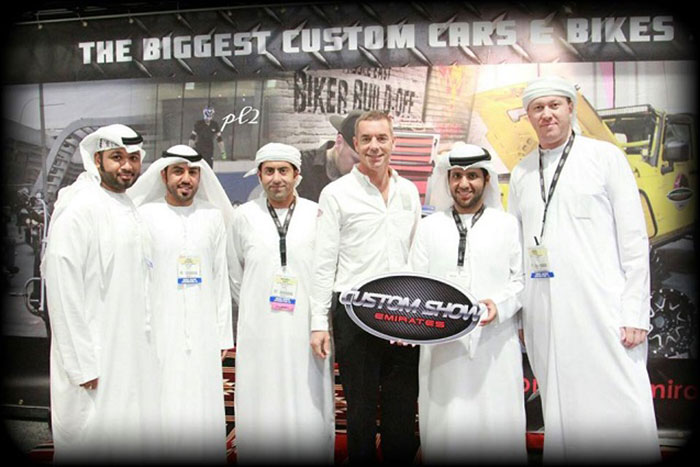 Organizers of Custom Show Emirates got a chance to strengthen their ties with the organizers of the SEMA when they participated in the event recently. The SEMA show is arguably the biggest tuning and tire related show in the world.

Commenting on their participation, Saeed Al Marzooqui, CEO, Custom Events L.L.C, UAE said that this is the third time Custom Show Emirates participated in the show. He added that taking part in the show gave the organizers a chance to explore numerous business opportuties. It also gave them a chance to connect with many people and cultures and break stereotypes that people have about shows held in the UAE.

Custom Show is a strategic partner of SEMA. Every year, the organizers of the show takes a delegation of companies from the region to visit SEMA and attend seminars organized by SEMA’s Middle East chapter. It serves as a crucial platform for leaders in the automotive industry to network and come up with solutions that are likely to help them ramp up their presence in international trade. The delegation this year was the biggest such delegation so far with significant representation from the UAE, Saudi and Qatar. Many high level trade and partnership deals were finalized as an outcome of the participation in the SEMA Show.

Commenting on the group’s participation in SEMA, Linda Spencer, Senior Director, International and Government Affairs, SEMA said that the SEMA was looking forward to bringing a group of US manufacturers to the UAE in March 2016 in order to exhibit at the Custom Show Emirates 2016. The key focus of the delegation would be to connect leading US firms with trade buyers from throughout the Middle East and India.

Custom Show Emirates 2016 is the largest event in the Middle East which focuses on the motor tuning industry. This will be the second edition of the event and many new pavilions and exhibitors from all over the world have confirmed their participation in the show including, USA, Australia, Japan, Russia, China, New Zealand and India. The event is expected to create significant impact in the regional motor tuning industry and to serve the main platform for exchanging ideas, presenting new products and providing opportunities for customers to choose the best products and services.

David Borla, Vice President of Sales and Marketing at Borla Performance USA said, “The symbiotic relationship between SEMA and Custom Show Emirates has resulted in a harmonious environment that fosters the appreciation of automotive personalization by bringing people together who have a common passion. This alliance is about much more than business, it’s about friendship, breaking down barriers, overcoming fears and presenting car culture to the world as a marvellous and positive global phenomenon that highlights the best of humanity and should be treasured

Roman Gavrilin, Chief Operations Officer, Custom Events L.L.C, UAE expressed his happiness at seeing the motor tuning industry in the region finally growing at a rapid pace and getting the international recognition it deserves. He added that the industry is set to scale even greater heights in the future and the Custom Show Emirates 2016 will be yet another milestone in the growth of the sector.

Custom Show Emirates is scheduled to be held from March 31 to April 2 at ADNEC in Abu Dhabi. The show will be open to the public from 10 AM – 10 PM every day and will run concurrently with the first edition of the Abu Dhabi International Motorshow and 3rd MECOTY 2016. Tickets are priced at 50 AED and will be available for sale soon.