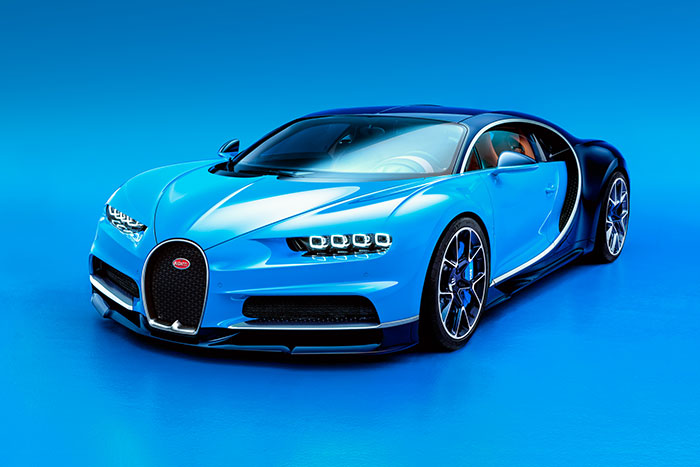 Billed as the fastest, most exclusive and most luxurious super sports car in the world, the Chiron has an output of 1500 hp, a figure never seen before for a production vehicle. According to Bugatti, the speed of the Chiron has been limited to 420 km/h for road use and only 500 units of the Chiron will be produced, retaining the exclusivity of the model. Already, advance orders have been received for more than 30 per cent of the production run, though the price tag of the Chiron is a hefty 2.4 million euros.

Commenting on the new model, Wolfgang Dürheimer, President of Bugatti Automobiles S.A.S said that he driving force at Bugatti is to always cross boundaries and set new records. He added that the Chiron is the outcome of the company’s efforts to make the best even better. He went on to say that with this model, Bugatti has established new paradigms by testing the limits of Physics.

As the first roadworthy super sports car to have an output of 1500 hp, the Bugatti Chiron is definitely setting a benchmark in the world of luxury sports cars with its combination of supreme performance, luxurious comfort and outstanding safety levels.

The performance is the outcome of the new engine that Bugatti has developed, the legendary eight-liter W16 engine which has been paired with four new, bigger turbochargers controlled by two-stage turbocharging, another Bugatti innovation. Many other technical innovations and refinements have been incorporated to keep performance at the maximum possible level while ensuring it is easily controllable at all speeds. The top speed has been capped at 420 km/h for road use, but the Chiron has the potential to achieve greater heights.

Other notable styling and design refinements include the use of a proprietary adaptive chassis, new carbon fiber monocoque, and tires that have been customized for the Chiron in order to deliver the maximum driving pleasure to owners.

The design elements consist of modern interpretation of typical Bugatti design cues and features that have been designed to meet the technical demands created by the higher performance, resulting in an effective combination of aggressive “beast” and refined “beauty”. The Chiron while having its own inpiduality stays true to its Bugatti DNA when it comes to design.

“The Chiron is the quintessential ultimate super sports car: ultra-modern, incredibly fast, agile and powerful with a stylistically demanding design and the highest possible levels of comfort,” says Wolfgang Dürheimer. “This combination is not offered by any other market player and gives Bugatti its unique market position.”

He went on to say that Bugatti customers are a select group of inpiduals who aim to own the very best. The Veyron was arguably the best production sports car in the past decade. Hence, the expectations for the Chiron are sky high. Customer reactions indicate that the Chiron is definitely a worthy successor to the Veyron, with advance orders being placed for about a third of the production run.

“Those who have already considered Bugatti and its unique features in connection with the purchase of a Veyron will find there is no way they can ignore the Chiron,” said Wolfgang Dürheimer.

He concluded by saying that the Chiron will not only substantially contribute to the emotional image of the Volkswagen Group but is also expected to make a positive financial impact on the Group results.