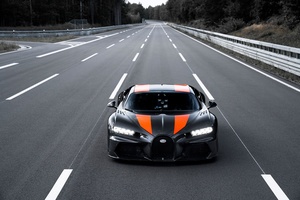 Commenting on the achievement, Stephan Winkelmann, President of Bugatti said that Bugatti has again managed to demonstrate what it is capable of with this new record of the Chiron. He went on to add that with this new world record, Bugatti will now shift its focus to other areas and withdraw from the race with brands like Koenigsegg to produce the fastest serial production cars.

The feat was achieved by Le Mans champion and Bugatti test driver Andy Wallace when he attained the top speed of exactly 490.484 km/h (304.773 mph) on August 2, 2019 on the test track at Ehra-Lessien in Lower Saxony. Wallace said that he felt very safe in the Chiron even in these high speed ranges. He advanced to the top speed from 300 km/h in 50 km/h increments to ensure that everything went well and that the Chiron had the optimal balance of lift and downforce. With ideal track and weather conditions and great support from the team, the record was broken at the first attempt.

Wallace drove one lap to condition the Chiron, and then accelerated out of the north curve to 200 km/h to reach top speed on the 8.8 kilometer straight stretch of the track. At a precisely defined braking point, he then decreased the speed of the Chiron back to 200 km/h to drive through the south bend, giving himself a distance of two kilometres in which to do so.

“I went at full throttle from the start for approximately 70 seconds. It was important for me to be out of the bend at 200 km/h in order to reach top speed on the straight. That required the very highest level of concentration,” said the new record-holder, who covered 136 meters in one second.

This is not the first time that Andy Wallace has set a speed record: in 1998, he achieved a speed of 391 km/h (243 mph) in a McLaren F1 on the same track, which was also a record.
The world record Chiron.

In order to achieve the record breaking feat, a team of engineers drawn from various disciplines, helmed by Bugatti’s Head of Development Stefan Ellrott worked on a pre-production vehicle of a Chiron derivative. They not only made aerodynamic improvements, but also focused a lot on safety. Andy Wallace was held in place by six-point belts and protected by an additional safety cell.

The Bugatti team received able support from Italian race specialist Dallara and tire maker Michelin, who collaborated with Bugatti on the project. Michelin has been a logstanding partner of Bugatti’s and ensured that the tires of the vehicle had the necessary grip and stability. The Michelin high-speed tires that are already used on the Chiron were again reinforced, especially in the case of the belts to handle the 5300 G, while still being street legal. We have to remember that the tires rotate up to 4,100 times in one minute. Prior to the attempt to break the record, the tires were subjected to extensive test bench trials at speeds of up to 511 km/h in the United States. They underwent rigorous quality controls even after production, with each tire X-rayed to optimize even the smallest details. The world record vehicle was only fitted with the Michelin Pilot Sport Cup 2 tires directly before the record run.

Prior to the attempt, the Bugatti engineering team also tested the engine’s performance and the interaction between engine, gearbox and chassis during various maneuvers as even the slightest changes can have a huge effect in this speed range.

“After all the calculations and tests, we felt sure the record was within our grasp. We had the technology under control at an early stage. But a world record attempt on an open track can have a few surprises in store. We were lucky today and everything went well,” says Head of Development Stefan Ellrott with immense satisfaction.

The record track
The Ehra-Lessien high-speed track in Lower Saxony is 50 meters above sea level and unlike tracks at higher altitudes like those in Nevada, has several drawbacks. The vehicle has to apply more force due to the higher air density, and at high speeds of over 400 km/h, driving it is like driving against a wall.

“Air pressure, air density and temperature are very important for high-speed driving and can make a difference of up to 25 km/h, depending on the altitude,” said Stefan Ellrott. Despite this drawback, the team still opted for the test track in Ehra-Lessien as this track offered the greatest possible safety.

It is the only track where safety standards for high-speed tests are really high with crash barriers lining the 21-kilometer three-lane highway and rescue services being available at the north and south ends. The carriageway was cleaned with special mats prior the road test in order to pick up stones and grit.

The record run was recorded by a sealed GPS box, and the certificate stating that as of August 2019, Bugatti is the first manufacturer to produce a car that runs faster than 300 mph was issued by SGS-TÜV Saar.
Bugatti has achieved other world records on this track with the Chiron. In 2017, former Formula 1 driver Juan Pablo Montoya drove a Chiron from 0 to 400 to 0 km/h on this test track in 41.96 seconds – the shortest run so far. Bugatti used the Veyron 16.4 to set speed records for production vehicles in 2005 and 2010, and in 2013 the Veyron Grand Sport Vitesse set the record as the fastest roadster.