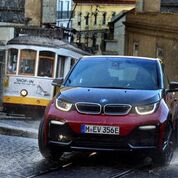 The BMW i3 has completed six years of spectacular success as a trailblazer for sustainable mobility. From the time it was launched at the retail level as BMW’s first electric vehicle, it has turned into a symbol of electric mobility and become the most widely sold cost-effective electric vehicle in the premium compact segment. To date, over 165,000 units have been sold across the globe, with sales figures steadily increasing year after year. The BMW i3 is meant o tbe more than a vehicle that is driven over short distances in an urban scenario and is optimized for daily use with its future-oriented interpretation of driving pleasure and versatile qualities. Early buyers of this model regularly travel longer distances in their BMW i3 and have each completed more than 200,000 emission-free kilometres.

Over the past six years, the BMW i3 has turned into an icon thanks to its role as a visionary technology flagship and continuing sales success. The BMW Group plans to further develop the model and extend production at least until 2024. What customers like most about the i3 are its reliability, durability and the practicable range of the BMW i3. The pioneers who bought their BMW i3 delivered shortly after its launch have subjected both the vehicle and its original battery to a real endurance test, a test they both have passed with impressive results.

Over 277,000 kilometres with the original set of brake pads.

Helmut Neumann from Titz in North Rhine Westphalia said that the vehicle concept of the BMW i3 is unique ,” comments. His i3 that he bought in 2014 has goone as far as Berlin and the Alps without any trouble. He said that in addition to the immense driving pleasure it offers, the i3 has proved to be an extremely economical car, both in terms of power consumption and maintenance costs. The model’s average power consumption is 13 kWh per 100 kilometres over the entire lifespan, and hence energy costs are minimal not only in comparision to internal combustion vehicles, but also even other electric vehicles.

German Automobile Club ADAC conducted an analysis which showed that in addition to ecological aspects, the BMW i3 also offers cost advantages. In a comparison of overall costs, the BMW i3 was around 20 percent better in terms of size and performance than a comparable BMW model powered by a combustion engine. In addition to lower energy costs and high value retention, low expenditure for maintenance and wear also contribute towards cost-effectiveness. The driver of a BMW i3 does not have to worry about oil changes or defective exhaust systems. Deceleration is usually effected by means of recuperation and hence brake pads and discs are rarely used.

Neumann is one of the customers who participated in the retrofit programme and substituted the 60 Ah battery of his BMW i3 with a gross energy content of 22 kWh for a 94 Ah high-voltage battery unit with a higher energy content of 33 kWh. The new battery offers greater energy reserves and according to Neumann makes things more convenient on long journeys.

Consistent vehicle range confirms the quality of the high-voltage battery.

Some of the first customers who purchased the i3 state that even with the original battery, the vehicle range decreases only a little even after high mileage, attesting to the quality of the high-voltage battery unit. As of now, not even one BMW i3 high-voltage battery had to be replaced due to premature ageing. With the battery’s potential not being spent when reaching the previously quoted 100,000 kilometres, the BMW Group has now extended its European warranty for the battery in new BMW i3 vehicles to 8 years and/or 160,000 kilometres.

The BMW Group has also come up with solutions for recycling batteries that can no longer be used in vehicles. Such batteries can still serve as stationary energy storage units. High-voltage batteries from pre-series vehicles and those given by customers who particpate in the BMW i3 retrofit program are currently used on the grounds of the BMW plant in Leipzig as storage units for the green power that is generated at the plant by the wind turbines.

Customers like Gabriele Forster from Austria use their i3 for their regular commute to and from work. Charging is not an issue for Forster as she plugs her BMW i3 (60Ah) into a wall box at midday and overnight, and this porvides sufficient charge to cover a distance of around 200 kilometres on a daily basis.

Shaun Maidment from South Africa said that he has never experienced “range anxiety”, and has driven the BMW i3 from Johannesburg to Cape Town. He drives as much as 300 kilometers on normal workdays, he drives up to 300 kilometres, charging the battery during customer visits to charge the battery. Maidment has even launched a crowd funding platform designed to support the installation of further public charging stations in South Africa in order to further promote electric mobility.

With a battery of the latest generation is installed in the BMW i3 (120 Ah), the vehicle’s range has now increased to a distance ranging between 285 and 310 km as per WLTP test cycle. In terms of daily use, this distance is now about 260 kilometers, an increase of about 50 percent when compared to the BMW i3 of the first generation.

Sustainable driving pleasure – a characteristic feature of the BMW i3.

Customers still love the i3’s spontaneous power and torque derived from the electric motor, its one-pedal feeling, its agility and its ease of handling. Rob van Roon from the Netherlands said that though he has tested many other electric vehicles, none can match the i3’s agility and handling. He has covered 276,000 kilometres in his car and added 25,000 more in a new i3 he got after March 2019. Rob van Roon and his family have driven their BMW i3 on trips taking them as far as the North Cape, the Algarve and Sicily.

Leif Carlsson from Sweden was one of the first customers to take advantage of a test drive in Stockholm in October 2013 and said he was convinced after just one lap in the car, calling it the coolest drive he had ever experienced. He still drives a BMW i3 (60Ah) with Range Extender on a daily basis and after covering over 216,000 kilometres in the vehicle, he enjoys the ideal balance it offers between driving pleasure and sustainability. Carlsson said there is no shortage with regard to charging options, even in the case of multi-storey car parks, as in Sweden auxiliary heating systems in automobiles are often supplied with electricity from the mains. There is a growing network of quick charging stations which have been installed at workplaces and public charging stations are also becoming more widespread. Carlsson rarely has to rely on the Range Extender. He also values the auxiliary heating in his BMW i3 during the winter, saying that the timer function works perfectly. Carlsson said, „When I get in the car to leave, the interior is warm and the windows free from ice and snow.”

João Gonçalves from Portugal is another satisfied customer who began his journey with the BMW i3 with a test drive in the winter of 2013. He said that not only was it love at first sight, but the vehicle also offered many economical and ecological advantages. His BMW i3 takes him everwhere – whether it is for work or for pleasure. He gets plenty of chances to recharge the battery during working hours or when he visits customers and drives up to 250 kilometers on a daily basis. Gonçalves later on switched to changed to a BMW i3s (120 Ah) (combined fuel consumption: 0.0 l/100 km; combined power consumption: 14.6 – 14.0 kWh/100 km; combined CO2 emissions: 0 g/km). The increased output of 135 kW/184 PS hp adds to driving pleasure and the high-voltage battery’s extended storage capacity “makes daily life even easier”, he says. “And longer journeys are now more comfortable and faster.” To prepare for long journeys Gonçalves uses the navigation system of the BMW i3. “It plans my route and indicates quick charging stations along the way, so I can be sure of reaching my destination without any problems.”