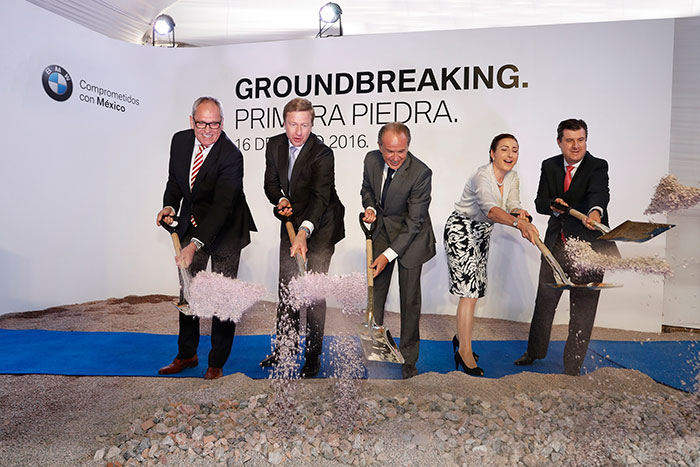 The automotive market in the NAFTA region is thriving and the BMW Group is planning to cater to the growing demand by setting up a new plant in Mexico. The company broke ground for its new factory in San Luis Potosí last week in an official ceremony that was attended by eminent dignitaries including Rogelio Garza Garza, Undersecretary of Industry and Commerce at the Mexican Ministry of Economics; Dr. Juan Manuel Carreras López, Governor of the state of San Luis Potosí; Oliver Zipse, member of the Board of Management of BMW AG who oversees Production and Milagros Caiña-Andree, member of the Board of Management of BMW AG, who handles Human Resources and Labour Relations. The BMW Group will invest over a billion US dollars and employ at least 1,500 people in the new plant.

According to Oliver Zipse, the new plant in San Luis Potosí will showcase the full extent of the BMW Group’s knowledge and capabilities with a production system that using innovative technologies, is geared to be a leader in productivity and sustainability.

Board of Management member for Human Resources Milagros Caiña-Andree emphasized the crucial role of employees in the BMW Group’s success. Hence, he said that it was important for the company to be seen as an attractive employer by encouraging employees to develop their talents and achieve their ambitions.

Governor Juan Manuel Carreras López said that the BMW Group’s plant would contribute to the development of industry in the region. He said San Luis Potosi is emerging as an attractive destination for investment in the automotive industry due to its skilled workforce, strategic location and well developed infrastructure.

The factory will be involved in every aspect of vehicle production with a body shop, paint shop and assembly, an innovative production system and comprehensive sustainability standards. This will be the first time that digital 3D-scan technology is being used for the set-up stage.

The new plant has been planned in such a manner that it will be the BMW Group’s most resource-efficient production location worldwide. One example of this is that the plant will run on electricity which is 100 per cent CO2 free, with most of it being sourced from an onsite solar system. The plant will also have the lowest water consumption per vehicle in the Group’s manufacturing footprint with zero process wastewater and recycled water being used for the painting process.