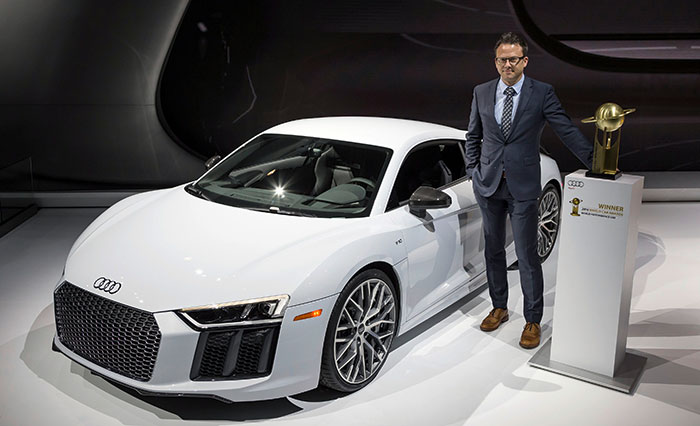 At the World Car Awards, the Audi R8 Coupé was named as the 2016 World Performance Car. The awards were given away at a glittering ceremony held during the New York Auto Show.

By winning four awards at the World Car Awards, the Audi R8 is the most successful model in the history of the awards. The R8’s predecessor had already won two awards in the Performance Car category and one award in the design category. The second generation of the R8 has continued this success story by emerging as the favorite choice of the highly expert jury which consisted of 73 leading automotive journalists drawn from different parts of the world. This makes the high-performance sports car a real winner on both the road and on the racetrack.

Commenting on the award, Dietmar Voggenreiter, Board Member for Sales and Marketing at AUDI AG said that the R8 has proved to be one of the strongest calling cards for Audi with its blend of powerful driving dynamics, distinctive design, its close ties with motorsports. It is Audi Sport’s flagship car and the first generation of the car propelled Audi’s success in being recognized as a premium brand. The new R8 will build on this success and will further drive Audi Sport’s growth strategy.

In comparison to Audi’s other production models, the Audi R8 Coupé offers more in terms of performance mainly owing to its V10 mid-engine and the newly developed quattro drive. The top variant, with an output of 610 hp, goes from 0 to 100 km/h in only 3.2 seconds and has a maximum speed of 330 km/h. The main features that make this model a truly exceptional car are its lightweight construction, a high-revving mid-engine, the highly dynamic suspension with quattro drive and fully variable torque vectoring.

The design of the Audi R8 has been inspired by technologies and know-how acquired from Audi’s close connection with motorsports. The model’s sport prototypes have won the 24 hours of Le Mans 13 times since 2000, and the R8 LMS contributed seven more overall victories in 24-hour races since 2009.