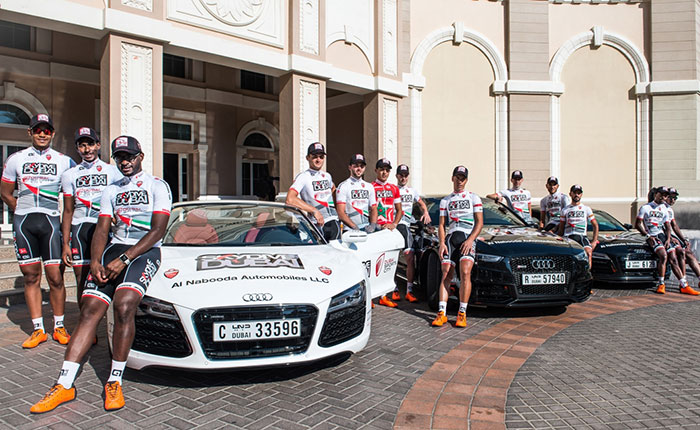 At the launch event held at the Westin Hotel, two new Audi Q7s with the logos of Al Nabooda Automobiles and Skype Dubai logo took centerstage along with two Audi R8s and an Audi RS5 that will be provided on an exclusive basis to the Skype Dubai Pro cycling team to cater to their needs over the four stages of the Dubai Tour.

As part of its sponsorship of the Dubai Tour, Al Nabooda Automobiles will provide a number of Audi vehicles to ensure that the race proceeds smoothly and safely throughout the four days of racing.

Commenting on the sponsorship, Ali Al Nabooda, General Manager Audi, Al Nabooda Automobiles said that the Audi brand has been identified closely with sporting excellence and the fleet of Audi cars for supporting the race will lead to greater levels of brand awareness among the spectators, cycling enthusiasts and fans when they spot the cars.

He concluded, “We have always been passionate about local teams and inpiduals that strive for the best in sports and I wish all the athletes the best of luck for the Dubai Tour.”

The Dubai Tour is a challenging cycle race in which contestants cover an arduous 676 gruelling kilometers. The race will be held from February 3 to February 6 over four stages and is slated for a spectacular finish in Business Bay on 6 February.