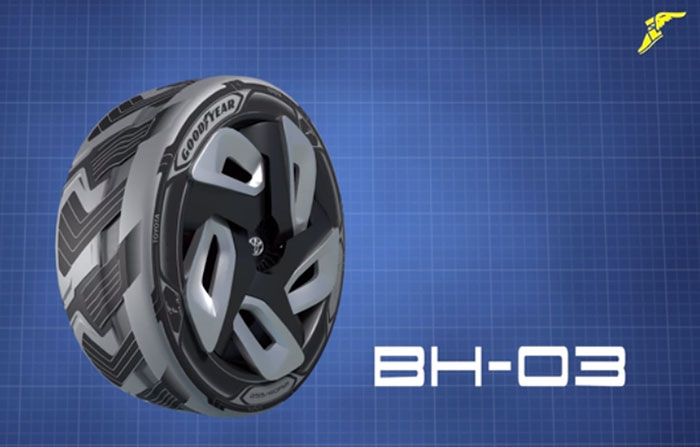 Commenting on the display, Mike Rytokoski, Goodyear’s vice president for consumer tires in Asia Pacific said that the tires displayed at the Expo showcased Goodyear’s consumer-centric innovation strategy, and the forward-looking, market-back mindset of Goodyear’s research and development teams in order to cater better to customer’s needs.

He added, “Our concept tires re-imagine the role that tires may play in the future. We envision a future in which our products become more integrated with the vehicle and the consumer, more environmentally friendly and more versatile.”

Named “BHO,” the first concept tire explores the possibility that tires may eventually play a role in charging the batteries of electric cars by utilizing the heat generated by the rolling tire and converting it into electrical energy. The second concept, called “Triple Tube,” has integrated into its structure three internal tubes that adjust tire inflation pressure depending on the external road conditions thus helping to get make tires more performance oriented and versatile.

Speaking at Goodyear’s display at the Expo, Rajeev Anand, vice chairman and managing director for Goodyear India, said the company’s “culture of innovation is not just confined to our history. As a pioneer in tire technology and innovation, we consistently keep challenging ourselves to develop products that offer better driving experience to consumers.”

In addition to the two concept tires, Goodyear will be highlighting other technologies including tires used in the aviation industry, NASCAR and RunOnFlat tires, along with the most modern tire products that the company has on sale in India at the moment, Assurance TripleMax and Wrangler ATSA.

Goodyear has operated in India for the past 92 years, and has two tire factories located in Aurangabad and Ballabgarh. These factories supply tires for passenger cars as OE fitments to a number of leading automakers as well as all the major tractor companies in the agricultural tire segment.