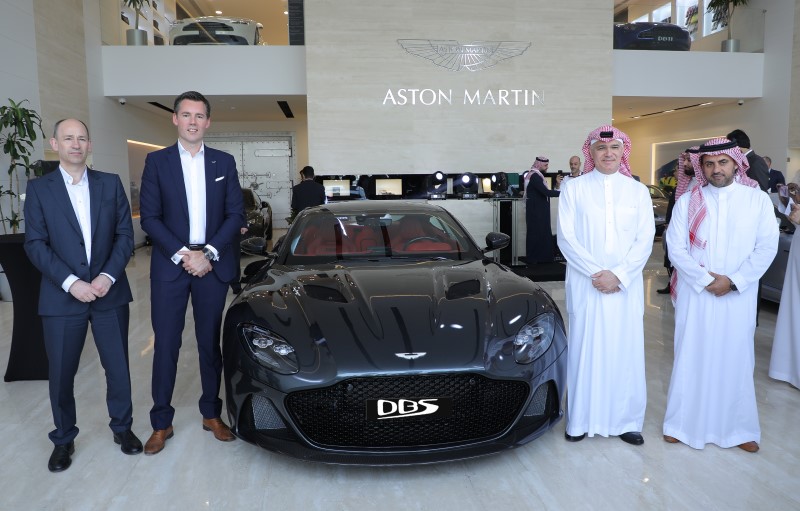 The impressive showroom which covers 521 square meters is the third such facility that Aston Martin has in the Kingdom. It is centrally located on Tahlia street and showcases the complete range of second-century Aston Martin models, including the DB11, Vantage and DBS Superleggera. The facility has been designed to conform to the highest standards and comprises a main showroom, an area dedicated to demo cars, an innovative car delivery space, Q Lounge and a specialised configuration zone.

Sheikh Ali Hussein Alireza, Managing Director of Haji Husein Alireza & Co. Ltd. Spoke at length on the key role the new showroom will play saying that there has been a significant increase in the demand for luxury cars in Jeddah, and it is this factor that prompted his company to set up a new showroom in Jeddah. He went on to state that the opening of the new showroom attested to the company’s high level of commitment to Aston Martin and marks a new era for Haji Husein Alireza & co in Saudi Arabia, as the company now has a platform to reinforce its reputation as a leading car dealer in the Kingdom.

A Rapide E cutaway model displayed prominently at the formal opening of the showroom highlighted Aston Martin’s commitment to environmental responsibility, use of cutting-edge technologies and its continuous drive to pave the way for development in the automotive industry. The Rapide E is recognized as the world’s first electric four-door luxury GT and it is Aston Martin’s first Battery Electric Vehicle. Aston Martin developed this model which would have a limited production run of 155 units in collaboration with Williams Advanced Engineering.

The Rapide E will be powered by an 800V battery and is the first BEV that is available at the retail level with such high capacity. The battery powers two rear-mounted electric motors which together produce a little 610PS and 950Nm of torque. The model can attain a top speed of 155mph, and can go from 0-60mph in less than 4 seconds while it can go from 50-70mph in just 1.5 seconds. It provides motorists with the same feel, character and delivery of the V12-engined Rapide S.

The Jeddah official opening also served as the occasion for the official launch of the DBS Superleggera in Saudi Arabia. Made from immaculately sculpted carbon fiber body panels, the DBS Superleggera is notable for its muscular and highly individual styling and matching performance powered by Aston Martin’s 5.2-liter twin-turbo V12 engine, which has been tuned to produce impressive power and torque.

Dan Balmer commented said that Saudi Arabia is an important market for Aston Martin, especially as it has an exciting range of second-century models and a new segment of women motorists wo are just starting to drive. DBS was Aston Martin’s third launch of its seven all-new models. This includes the DBX SUV, which will be launched later this year.

He said that Aston Martin was showcasing its Rapide E technology outside the UK for the very first time in the Kingdom. The opening of the new Aston Martin showroom in Jeddah’s city center highlights the success of the relationship between Aston Martin and its dealer, Haji Husein Alireza & Co. Ltd.

“The DBS Superleggera goes beyond the limits in celebrating the return of one of the leading names of the Aston Martin brand. Surpassing standards, it boasts remarkable features and dynamics that have been carefully honed to engage drivers wishing to own a car with a distinctive and powerful design and engineering feel, making it a true milestone for Aston Martin,” added Alireza.