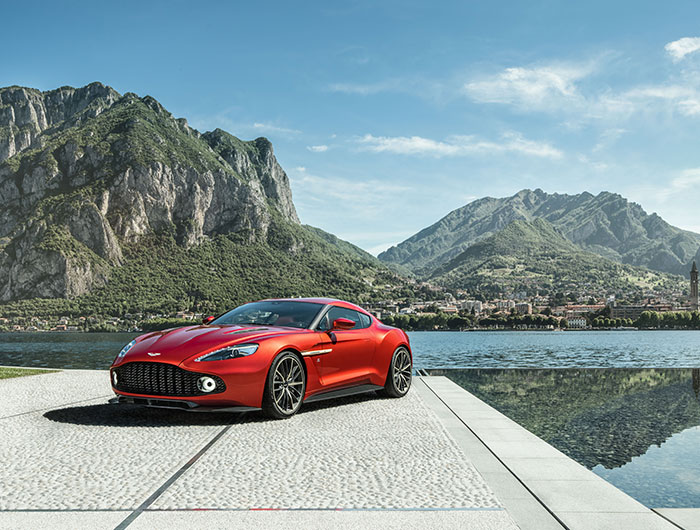 have a production run of only 99 vehicles. Each car will be lovingly made to order, with deliveries scheduled to begin in the first quarter of 2017.

The Aston Martin Vanquish Zagato made its first appearance on the world stage as a concept vehicle at the Concorso d’Eleganza Villa d’Este at Lake Como, Italy in May 2016. It has a body that is completely fashioned from carbon fiber, with large one-piece panels being used to the maximum possible extent in order to reduce split lines on the body. Other distinctive external features include new lights with round tail light reflectors, wing mirrors similar to those for the One-77, and a sculpted rear end having a retractable spoiler and rear hatch for quick access to the boot. In true Aston Martin tradition, the roofline has Aston the brand’s iconic “double bubble” look.

The car is powered by a 6.0-liter V12 engine having an output of 576 hp. The model can go from 0-60 mph in just 3.5 seconds, and will have a suspension that has been specially modified to provide users with “a unique GT experience.” The emphasis will be on providing passengers with greater levels of long-distance comfort and luxury as the model is positioned as a Grand Tourer.

The interiors evoke a luxurious feel with the use of rich materials like the combination of herringbone carbon fiber with shadow and anodized bronze and even optional aniline leather for the fascia, vents and rotary dial and the unique ‘Z’ quilt pattern stitch for the seat and door sections. The trademark Zagato ‘Z’ is embossed on headrests and stitched into the center console.

This will be the fifth time that Aston Martin has collaborated with the prestigious Italian design firm, Zagato. The first vehicle the two firms worked on together was the DB4 GT racecar in 1960 which now costs a hefty GBP 10 million while the last model they collaborated on was the V12 Vantage Zagato that was launched in 2011

The Vanquish Zagato is poised to be a highly iconic and sought after Aston Martin.