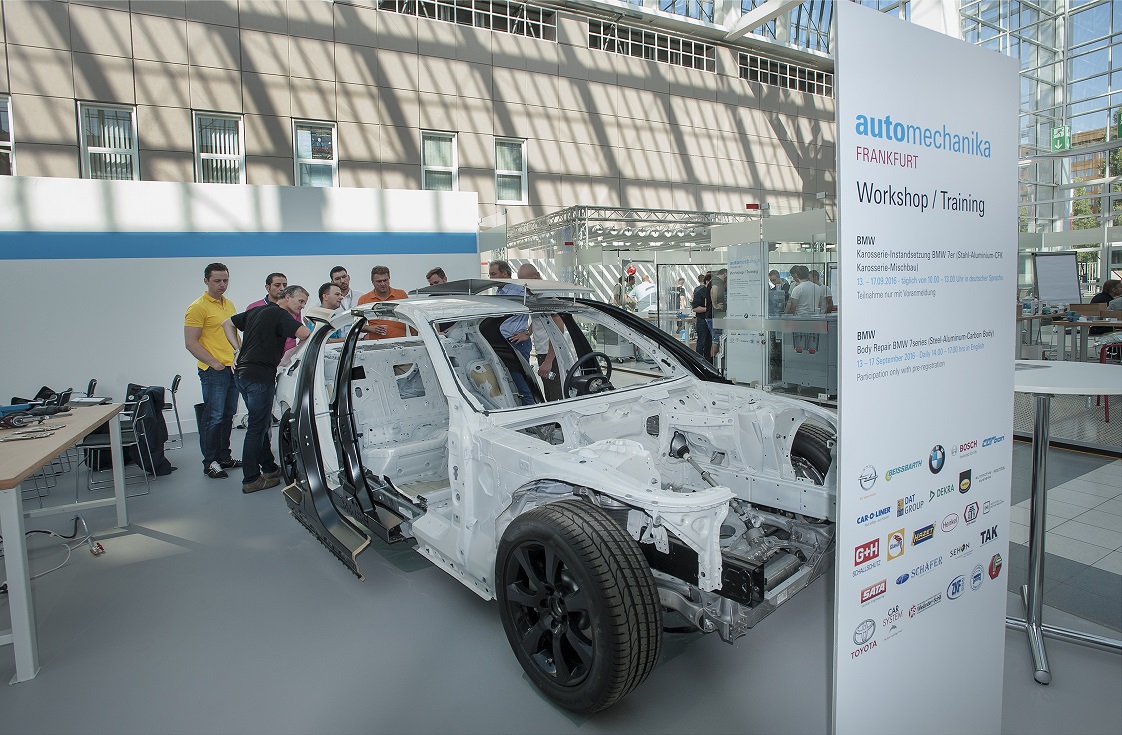 Advanced Training workshops at Automechanika 2016 Prove to be a Success

It has been two months since the 24th edition of the Automechanika Frankfurt trade fair was held. Nevertheless, its impact continues to this day not only for the exhibitors who benefited from numerous new deals, but also for the visitors who learned a great deal about new products and services that would make their lives easier. One example of features that benefited visitors was the the advanced training workshops at the fair dealing with accident damage repair.

When the concept of these three-hour long workshops was first discussed, it was felt that few visitors to a trade fair would have the time or energy to spare to attend such workshops. Nevertheless, both at the 2014 and 2016 editions of the show, visitors proved them wrong. More than 800 visitors to the show took advantage of the chance to attend the twelve workshops that were organized during the 2016 edition for Automechanika Frankfurt. The workshop sessions were conducted in German in the morning and in English in the afternoon and covered a number of important topics like “Systematic assessment and recording of accident damage in cars”, “Digital calculation and communication of repair costs”, “Trained personnel for hybrid / hydrogen-electric power units” which will become increasingly relevant in the coming years, “Reading stored fault codes / fault diagnosis / headlight adjustment” and “Diagnosing chassis and suspension faults / camera calibration”. There were also workshops on new body-work assembly techniques, innovative materials and composites in motor-vehicle construction and new painting techniques. All the workshops involved a high degree of practical involvement and live demonstrations.

The fact that the workshops were available in both German and English was very well received. Though there was a higher level of attendance in the morning sessions, many overseas visitors to the fair planned their visit to the Automechanika fair around the sessions, considering them as a step further in their own personal professional development.

Dirk Breuer from Toyota who conducted a session on workshop Trained Personnel for Hybrid Hydrogen-Electric Drive Units said that many visitors from overseas attended the sessions including those from Australia, New Zealand and Asia. Course leader, Michael Geiger from BMW too reported a high level of overseas participants for his workshop on body-work repairs to the new BMW 7 series, which are particularly challenging, as various types of material have been used in the construction of the vehicle. Geiger said, “We had a very well informed audience in the afternoons as well and, through the workshop, we were able to reach precisely the target group we had in mind. He said his audience comprised professionals like students preparing for their master craftsman certificates, damage assessors and representatives of insurance companies, as well as owners of repair shops and their staff from Germany and abroad.

The trainers praised the positive attitudes of visitors, who exhibited keenness to learn and were knowledgeable in their field. According to Klaus Dollas from Carbon, who was demonstrating new techniques for the removal of dents, many participants were directly involved in the motor-vehicle sector and lively participation, the subsequent discussions and the perseverance and ability to concentrate of those attending highlighted the quality of participants.

Messe Frankfurt received universal appreciation for the organization of the workshops, the content of the program and the running of the events. The advanced training workshops will be held again in 2018, the year of Automechanika’s 25th anniversary.