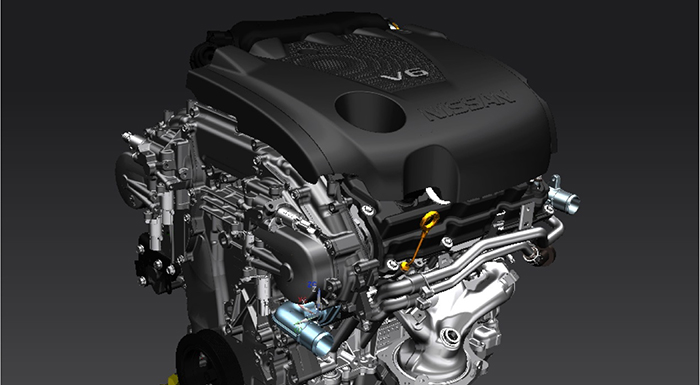 In choosing this year’s winners, WardsAuto editors spent October and November assessing 31 new or improved powertrains available in vehicles on sale in the USA with a base price under $61,000 for next year. No instrumented testing was involved and included in the factors considered are fuel economy, noise attenuation, comparative specs, torque, horsepower and the application of new technology.

Pierre Loing, vice president, Product Planning, Nissan North America, Inc., believes that when the 2016 Maxima arrives in showrooms in May, the redesigned 3.5-liter V6 engine would be an essential piece of the puzzle. “To be included in Wards 10 Best Engines list is a tribute to the outstanding design, performance and value of our new-generation Nissan Maxima flagship sedan. We thank everyone at Wards for this significant recognition.”

Through the years, the guiding principles for the competition have remained the same: whether the engine or electric propulsion system sell the car or raise the standard for its competitive set. The editors noted the Maxima 3.5-liter VQ-series V6 engine’s 61 percent new parts, reduced weight and friction and new intake manifold among the key factors in its inclusion on this year’s list. In order to successfully meet the demands of the higher compression ratio and combustion temperatures, the engine applies lessons learned from the GT-R such as sodium-filled valves.

Apart from a high specific output (HP/L) of 85.7 horsepower/liter, the revised engine also provides a 15 percent increase in highway fuel economy to 30 miles per gallon. There is also a new, performance-oriented Xtronic transmission that features a wider ration range, which enables for stronger acceleration from a standing start and a new D-Step shifting logo that offers quick shifts at high throttle openings.