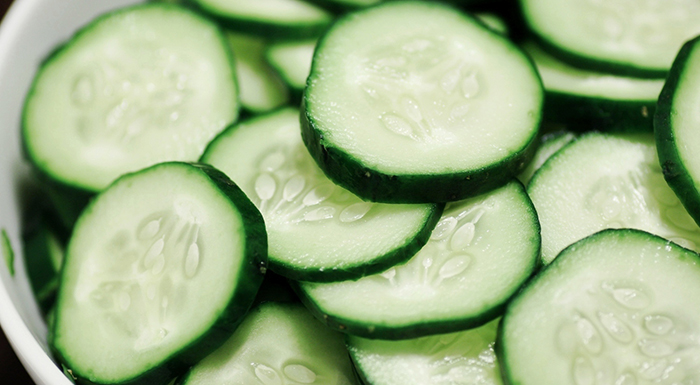 The Health Benefits of Cucumber

The humble yet versatile cucumber is a refreshing vegetable of the gourd family that is not only packed with nutrients, but is also a great way to stave off hunger and beat the heat. Considering their substantial water content, you might think that cucumbers do not possess enough nutritive value. However, research has shown that they have a number of health benefits.

Without argument, the primary benefit of cucumbers is their hydration value. A cucumber is approximately 96 percent water—more than any other fruit or vegetable with zucchini, celery and radish coming in a close second at 95 percent. The hydration from a medium-sized cucumber can substitute for potable water for a few hours on a hot summer day.

A common mistake made in kitchens around the world is the removal of cucumber skins. When eaten with its skin, a cucumber supplies about 10 percent of your daily recommended intake of vitamin C while providing you with Vitamin K and several B vitamins. Cucumbers are also a rich source of minerals, containing molybdenum, calcium, iron, magnesium, potassium, and manganese.

Cucumbers and cucumber extracts are rich in lignans, flavonoids, and triterpenes—chemicals that have anti-inflammatory and antioxidant properties. In addition to possessing immunity-boosting and disease preventive properties, these phytonutrients help the body resist certain types of cancers. Research into specialized triterpenes called cucurbitacins has revealed that fresh cucumber provides the body with five classes of this valuable biological compound, which has been shown to block the signaling pathways during the development of cancerous cells. Cucumbers also contain lariciresinol, pinoresinol, and secoisolariciresinol—three compounds that help prevent cardiovascular disease and cancers of the uterus, breast and prostate.

Cucumbers are among the safest snack foods because of their low calorific content and the absence of any cholesterol. This makes them ideal for people who suffer from type II diabetes and cardiovascular ailments. A full serving of cucumber contains only 2 grams of carbohydrate. Whether you snack on them at the office as a meal substitute or between meals, cucumbers can help you stay healthy around the clock, making for a great after-workout snack or a palate cleanser. Also, the potassium content of cucumbers makes them a great food for your heart.

The well-known practice of soothing your eyes with two slices of cucumber is firmly grounded in science. In addition to their water content, a cucumber’s anti-inflammatory properties greatly help soften the skin around the eyes. A few slices of cucumber can also relieve sunburn when applied topically.

With all the health benefits that cucumbers have in store, you should include them in your daily diet. Why don’t you try munching on them at the office tomorrow?