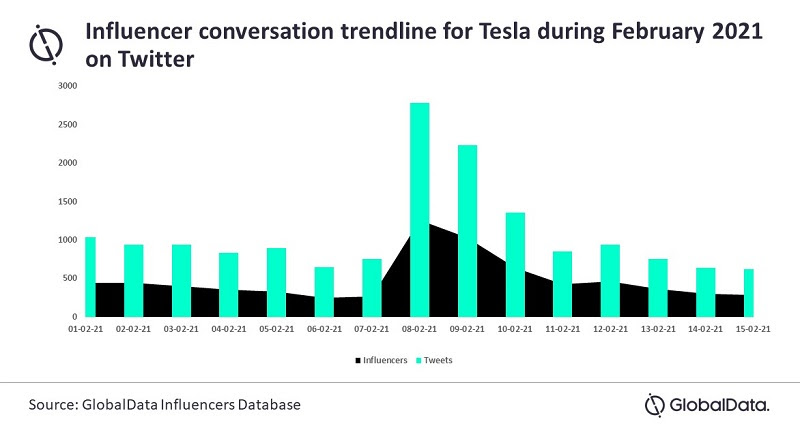 Tesla Inc. witnessed a dramatic 60% jump in influencer conversations on Twitter during the second week of February 2021 over the previous week, following the electric vehicle manufacturer’s announcement to invest US$1.5bn to incorporate bitcoin into its payment infrastructure, according to GlobalData, a leading data, and analytics company.

In a recent update to its investment policy, Tesla decided to provide more flexibility to diversify cash and cash-equivalent holdings and maximize return on cash. The company also mentioned its plan to accept digital currency as a form of payment option for its products in near future.

Smitarani Tripathy, Influencer Analyst at GlobalData, comments: “An analysis of GlobalData’s Tesla, Inc Company Influencer Platform, which tracks leading industry experts and their discussions on Twitter, revealed Bitcoin, Investments, #Tesla, Cryptocurrency, #Btc and Payments as the most mentioned trends and hashtags among influencer discussions during the same period.”

The news of Tesla’s decision to invest in bitcoin received lot of reactions from influencers on Twitter. Below are a few most popular influencer tweets captured by GlobalData on 8 February:

“Tesla received $1.5 billion in environmental subsidies in 2020, funded by U.S. taxpayers. The subsidies are intended to reward and encourage environmentally friendly behavior. #Tesla then spent the same amount buying #Bitcoin, which wastes electricity and harms the environment.”

“BOOM! Tesla buys $1.5 billion in #Bitcoin and will invest in more according to SEC filing. “we invested an aggregate $1.50 billion in bitcoin”—Tesla This will be the start of something massive for corporate treasury. Buckle up folks.”

“TESLA 10-K: “we invested an aggregate $1.50 billion in bitcoin under this policy and may acquire and hold digital assets from time to time or long-term. Moreover, we expect to begin accepting bitcoin as a form of payment for our products in the near future.” $TSLA.”