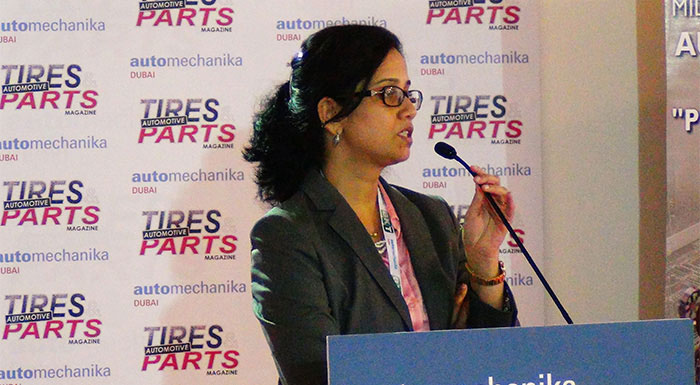 Prachi Satoskar, Business Group Manager at GfK Retail and Technology, a global consumer information and market research firm, presented a detailed overview of spare parts markets in the UAE and in Saudi Arabia as well as trends in tire and engine oil in the region during the Spare Parts & Maintenance Conference held as part of Automechanika Dubai. Ms. Satoskar brings over 16 years of experience in market research, product management, and business strategy and is regarded as a leading authority in the areas of market research, market analysis, and the development of go-to-market strategies for clients from around the world.

Founded in 1925, Gfk is a market research giant with over 13,400 employees and a global presence in over 100 countries. With more than a quarter of its employees servicing the Middle East, Turkey, and Africa region, Gfk is a major presence in a wide range of key sectors including automotive, consumer goods, energy, fashion and lifestyle, financial services, healthcare, technology, retail, and industrial goods. The company’s insights are available in over 100 markets but are localized to inpidual countries. Gfk is based in the UAE as the hub for the MENA region, with a focus on GCC countries.

Ms. Satoskar introduced Gfk’s audit methodology, citing the group’s use of a unified methodology across regions enables the effective comparison of data across countries. A clearly demarcated product boundary forms the basis of Gfk’s reporting methodology. A salient feature of the company’s approach is the identification of the sources of tires and oils, specific to each country. A study of inpidual channels is followed up by the creation of a “universe database” that tracks every outlet that sells car tires, truck tires, oils, batteries, and spare parts. The universe study of the UAE, Saudi Arabia, and Egypt took 6-8 months. An overview of the UAE’s demographics was also provided as a backdrop to the consumer market analysis.

Spare Parts and Batteries in the UAE

Currently, the UAE has 4089 outlets with 2,771 spare parts handlers across the Emirates distributed across Sharjah, Abu Dhabi, and Dubai in order of density. A brief overview of the market reveals 2,155 handlers for filters, 1,357 for spark plugs, 1,343 for brake pads, 1,179 for engine belts, and 1,133 for fuel pumps. A distribution overview of the 1,957 outlets dealing in starter batteries including car batteries, truck batteries, coach batteries, carwash or motorhome batteries, and agricultural batteries was presented.

There are 3032 handlers for vehicular engine oils in the UAE with Abu Dhabi, Sharjah, and Dubai leading the distribution of handlers in the country. A larger number of outlets sell car engine oils while a comparatively smaller number dealing with engine oils for trucks.

The automotive trade value in the UAE is estimated to be USD 22.6 billion, representing an increase of 22 percent since 2014. A salient feature of the automotive import market is that 70 percent of parts imported are re-exported to other countries in the MENA region. The UAE contributes 22.5 percent of new car sales in the GCC, with Saudi Arabia leading at 49.3 percent. Cars represent 62.8 percent of the import market in the UAE with spare parts and accessories representing 12.8 percent of all auto imports.

The UAE is a leading supplier of pirated parts because of consumer preference for heavily discounted prices. Illegal distributors and retailers are able to outperform authorized agents and distributors because of high volume sales and low profit margins across an extensive distribution network. These operators do not pass import tariffs or additional expenses to their customers in order to maintain their competitive price advantage. Such parts are sourced from damaged cars from insurance companies and cars obtained from police auctions. This illegal trade has developed to a point where 90 percent of all spares can be procured on-demand.

The industry overview of Saudi Arabia began with a brief note about the country’s demographics and indicated that the “universe” consisted of 8,440 outlets spread across 30 cities that are home to approximately 70 percent of the country’s population. Riyadh, the capital, and Jeddah, a major trade hub have 1,866 and 1,731 outlets respectively. A recent study of the 5,991 spare part handlers indicates the presence of 988 “Fast Fit” and 558 battery specialists who also sell spare parts.

Excluding the coverage of highways and connecting roads, Saudi Arabia has 4,917 oil outlets selling engine vehicle oils. The distribution of these outlets is primarily in Makkah, Riyadh and in the Eastern Province. Truck oils are primarily distributed by outlets on highways.

The UAE sees approximately 225,000 to 230,000 tires being sold every month with 15-inch and 16-inch tires being the major contributing segments while the market for 20-inch tires shows steady growth. Similarly, in Saudi Arabia where passenger tires represent the largest segment, the monthly sales of passenger car tires stands at 490,000 with SUV tires at 120,000.

Engine Oil Sales in the UAE

Loose engine oil represents the largest proportion of the 3.9 million liters sold every month with 10W-40 being the major contributor.

In Germany, only 37 percent of total auto revenue is from new car sales while 63 percent of sales comes from spare parts in the aftermarket sector. The approximate cost per repair stands at €162 with a 15 percent increase in maintenance expenses from 1996 to 2015, while repair expenses have dropped 7 percent during the period. OEM workshops hold 52 percent of the market share while independent workshops hold a 39 percent share of the market. An interesting trend is the decreasing frequency of repairs.

Iran is currently ranked 79th in the world based on the automotive per capita ratio of 164 cars per 1000 people. This has increased to 178 cars per 1000 people as of 2015. The automotive industry is the second most active industry in the country, contributing 10 percent to the nation’s GDP and employing 700,000 people—approximately 4 percent of its workforce. IKCO and SAIPA are the largest of Iran’s 25 automakers and are listed on the stock exchange despite a 40 percent ownership stake by the government. IKCO leads the passenger car markets at 47.8 percent and commercial car markets at 60.7 percent. Iran’s growing automotive market is set to benefit the aftermarket sector that has 1,200 parts manufacturers that export parts to 39 countries.