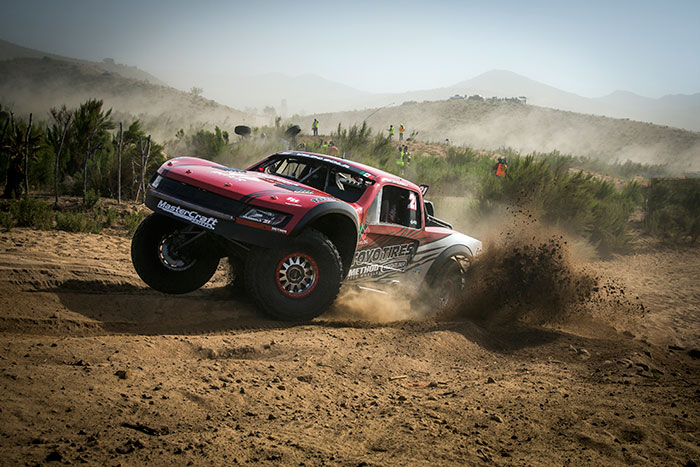 Team Toyo’s driver Gustavo (Tavo) Vildósola, Jr. and Toyo Tires emerged as the winner of the 48th Annual SCORE Baja 500 this past weekend, coming first in the Four Wheel Vehicles category as well as the Trophy Truck class. It was no easy victory as Vildósola had to tackle extreme temperatures in order to race across the 477.52-mile long course in the desert in just 8 hours and 20 minutes. His #21 Vildósola Racing / Toyo Tires trophy truck was fitted with 40-inch Toyo Open Country R/T-R tires and this contributed to his victory over the challenging desert terrain.

Commenting on his victory, Vildósola said that winning a race in Baja is no easy task as it requires perfection. His team spent a great deal of time testing the tires in the period leading up to the SCORE Baja 500, as they knew that the conditions were going to be extreme. The entire course was not only technical and rough, the weather also played the villain with temperatures crossing 120 degrees Fahrenheit. He went on to attribute his victory to the assistance he received from his team and Toyo Tires. He also said that the victory in this event will inspire him to tackle the SCORE Baja 1000 and other future races with greater dedication.

“The SCORE Baja 500 is one of the toughest desert races in the world and to be first is a testament to Tavo’s talent and dedication. We are proud to make tires that can match his toughness and tenacity, and we look forward to celebrating many more victories together,” said Amy Coleman, senior director of marketing, Toyo Tire U.S.A. Corp.

Another notable victory recently was that of the Ampudia Brothers who emerged as the winners of the Class 8 category driving their #836 Team Papas and Beer race truck that was fitted with Toyo Open Country M/T tires.