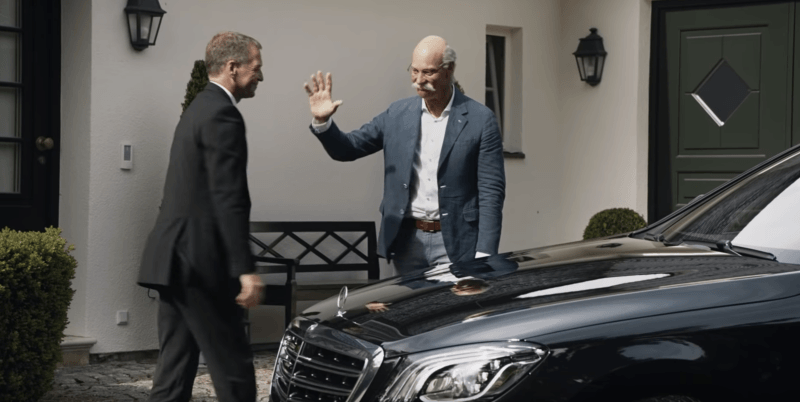 Dieter Zetche retired as the Chairman of the Board of Management of Daimler and the Head of Mercedes-Benz Cars after over 13 years at the helm. BMW used this as an opportunity for creating a promotional video that offered a cheeky take on his last day at work. The video depicted a very convincing lookalike Dr.Zetche bidding goodbye to his colleagues, handing in his official badge and being driven home in a chauffeured black Mercedes-Benz S-Class. Once he arrives home, he is free from all the pressures of being the Chairman of one of the leading companies in the luxury car business.

His retirement marks the beginning of a new era and he goes to his garage to pick his new ride. The garage does house a vintage Mercedes, but he opts for a sporty BMW i8 Roadster instead and the video concludes its tribute to Dr. zetche with the line “Thank you, Dieter Zetsche, for so many years of inspiring competition.”

Uploaded with the tagline “Free at last” on its official YouTube channel, BMW’s warm and touching video applauding Dr. Zetche’s contribution to the automotive industry proves that competition between rivals need not always be cutthroat. The video quickly became viral and gained over 3 million views on YouTube and another 1.5 million on Facebook with many appreciating BMW’s creative take on the situation.

Mercedes was quick to react to the video with a response on Twitter, which suggested that Zetsche is probably going to be using an all-electric EQ model from Mercedes as his next car, instead of BMW’s open-top hybrid sport.

Dr. Zetche, who was born in Turkey, joined the R&D division of Daimler immediately after completing his degree in electrical engineering in 1976. In 1981, he was promoted to Assistant Development Manager and in 1995, after several years abroad in stints overseeing Daimler’s commercial vehicles business units in Brazil, Argentina, and the United States, he was appointed as the head of sales to the board of management of Mercedes-Benz AG. After a decade, he became Head of the Mercedes-Benz Car Group and just a year later was appointed as CEO of Daimler AG.

Commenting on Dr. Zetche’s retirement, Manfred Bischoff, Chairman of the Supervisory Board of Daimler AG said, “With Dieter Zetsche, an exceptional executive is leaving. He has successfully led Daimler back to the top, also through difficult terrain. Together with the employees, he has pushed forward the company’s fundamental transformation. Under his leadership, Daimler has laid the foundation for a good future. He deserves our unqualified gratitude.”

Zetsche’s successor in Daimler is Ola Kallenius and he has pretty big shoes to fill.