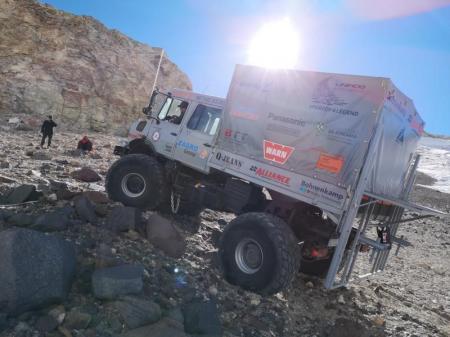 Yokohama Rubber Co. has announced that its group company, ATG (Alliance Tire Group), which specializes in the production and sales of off-highway tires supplied its Alliance 392 HD all-steel radial tires to a truck expedition that managed to achieve the goal of reaching the highest point on Earth ever reached by a motor vehicle.

ATG carried out the expedition in collaboration with the company’s distributer in Germany, Bohnenkamp. The expedition was carried out as part of a project to install shelters and an emergency wireless radio system as well as achieving the record high altitude on Ojos del Salado. Ojos del Salado is the world’s highest active volcano which is located in the Andes Mountains on the border between Argentina and Chile. The project team completed the installation at 6,400 meters above sea level and managed to climb up to an altitude of 6,694 meters above sea level. This, according to the company is the highest point ever reached by a motor vehicle. The Alliance 392 HD tires from ATG played a key role in the success of the expedition as they delivered outstanding performance on really demanding surface conditions which included jagged lava rocks, volcanic sand, and steep slopes, and also sported a wide temperature range that varied from -30 degrees C to +35 degrees C.

The Alliance 392 HD tire is an all-steel radial tire that has the capability to support heavy loads. It also has a high floatation structure that makes it possible for the truck to float over sand and loose soil by minimizing soil compaction, thus providing a greater level of protection to the soil. Other notable features of the tire include impressive handling stability, durability, and wear resistance across a wide range of vehicle speeds and in severe climates and terrains, like those experienced at the high altitudes by the  recent expedition.

Yokohama Rubber’s current medium-term management plan, the Grand Design 2020 (GD2020) also includes a strategy for commercial tires that targets “Positioning commercial tires as a pillar of growth in our second century and off-highway tires as a growth driver.” In line with this strategy, the company is making an effort to increase the sales of off-highway tires including ATG tires for agricultural, forestry, and construction machinery, as well as Group company Aichi Tire Industry’s tires for industrial machinery, and Yokohama tires for trucks, buses and construction machinery.