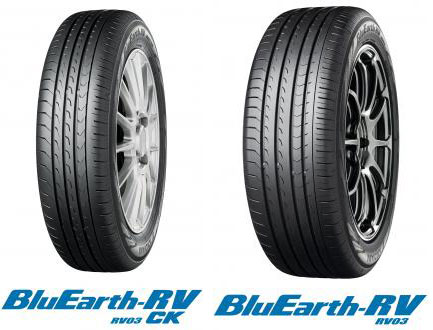 The Yokohama Rubber Co., Ltd., announced today that it will introduce two new tires for its fuel-efficient BluEarth brand lineup in February 2022. Sales of the BluEarth-RV RV03 for minivans will be launched first in Japan and gradually expanded to other Asian countries. The BluEarth-RV RV03CK for compact minivans and lightweight box wagons will be launched in Japan only. The two tires will be available in 40 sizes, ranging from 245/40R20 99W XL to 145/80R13 75S.

The BluEarth-RV RV03 shall be Yokohama Rubber’s first all-new fuel-efficient tire for minivans in seven years. In addition to securing the same high evaluation as its predecessor BluEarth RV-02 and receiving the Japan tire-labeling system’s highest “a” grade for wet grip performance and “A” grade for rolling resistance*1, the BluEarth-RV RV03 sustains its predecessor’s excellent uneven wear resistance and stability. In addition, the tire’s enhanced wear resistance and quietness provide new value-added befitting its basic concept as a “longer-lasting and more comfortable tire for minivans.” The tread pattern, based on the predecessor’s asymmetric pattern, features a finely optimized tread profile and ratio of groove and sipe areas. In addition, Yokohama Rubber’s cutting-edge rubber-mixing technology, “A.R.T. Mixing,” was used to develop an exclusive-use compound that enhances the tire’s road-surface followability. These enhancements have raised BluEarth-RV RV03’s wear resistance by 20%*2 and reduced road noise to provide a quieter ride in the minivan’s second and third row seats as well as in the driver and front-row passenger seats.

The BluEarth-RV RV03CK will be Yokohama Rubber’s first all-new fuel-efficient tire for compact minivans and lightweight box wagons since it launched the predecessor BluEarth RV-02CK five years earlier in 2017. The application of the same technologies used in the new BluEarth-RV RV03 has raised the BluEarth-RV RV03CK’s wet-grip performance from its predecessor’s “b” grade to “a” on all tire sizes. In addition, it has received an “A” grade for rolling resistance.

BluEarth is a YOKOHAMA global tire brand based on the concept of being “environmentally, human, and socially friendly.” The BluEarth brand lineup of fuel-efficient passenger car tires includes nine tires. In addition to minivan tires, the lineup includes a crossover SUV tire, a grand-touring tire, standard tires, an all-season tire.