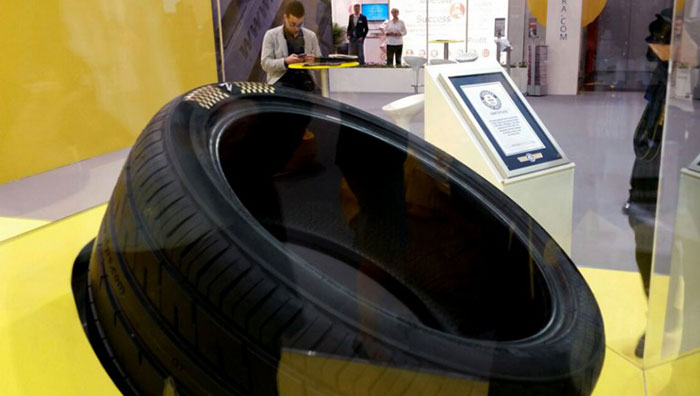 Zenises Steals the Show at Reifen with Record Breaking Tire

Zenises stole the show at the recent Reifen show by presenting a set of four tires that was certified by the Guinness Book of World Records as the most expensive tires in the world. The set of four Z-branded 295/35 ZR21 107Y XL tires cost USD 600,000 and was made in the Sentury Tire factory in Qingdao, Shandong Province, China. The high cost of the tire was attributed to the incorporation of 24 karat gold and specially selected diamond stones. In addition to the diamond and gold that was used to embellish the tires with the assistance of experienced Italian artisan team of jewelers from Joaillier Prive , the tires were also brought to the UAE for the application of gold leafing by the same craftsmen who used similar touches to decorate the new presidential palace in Abu Dhabi.

The record was certified by the adjucator from the Guinness Book of World Records, Sophia Greenacre. In order to qualify for the record, the minimum price of the set of tires had to be USD 500,000. It should also be possible for the tires to be physically used on a car and they should be commercially available.

Speaking about the record, Zenises CEO Harjeev Kandhari said that the special set of tires was created to celebrate the outstanding skills and dedication of the team involved in developing the company’s Z Tyre range.

Prior to the official establishment of this Guinness World Record, the Michelin tires that were used for the Bugatti Veyron were considered to be the most expensive, with a set of four tires costing GBP 25,000.