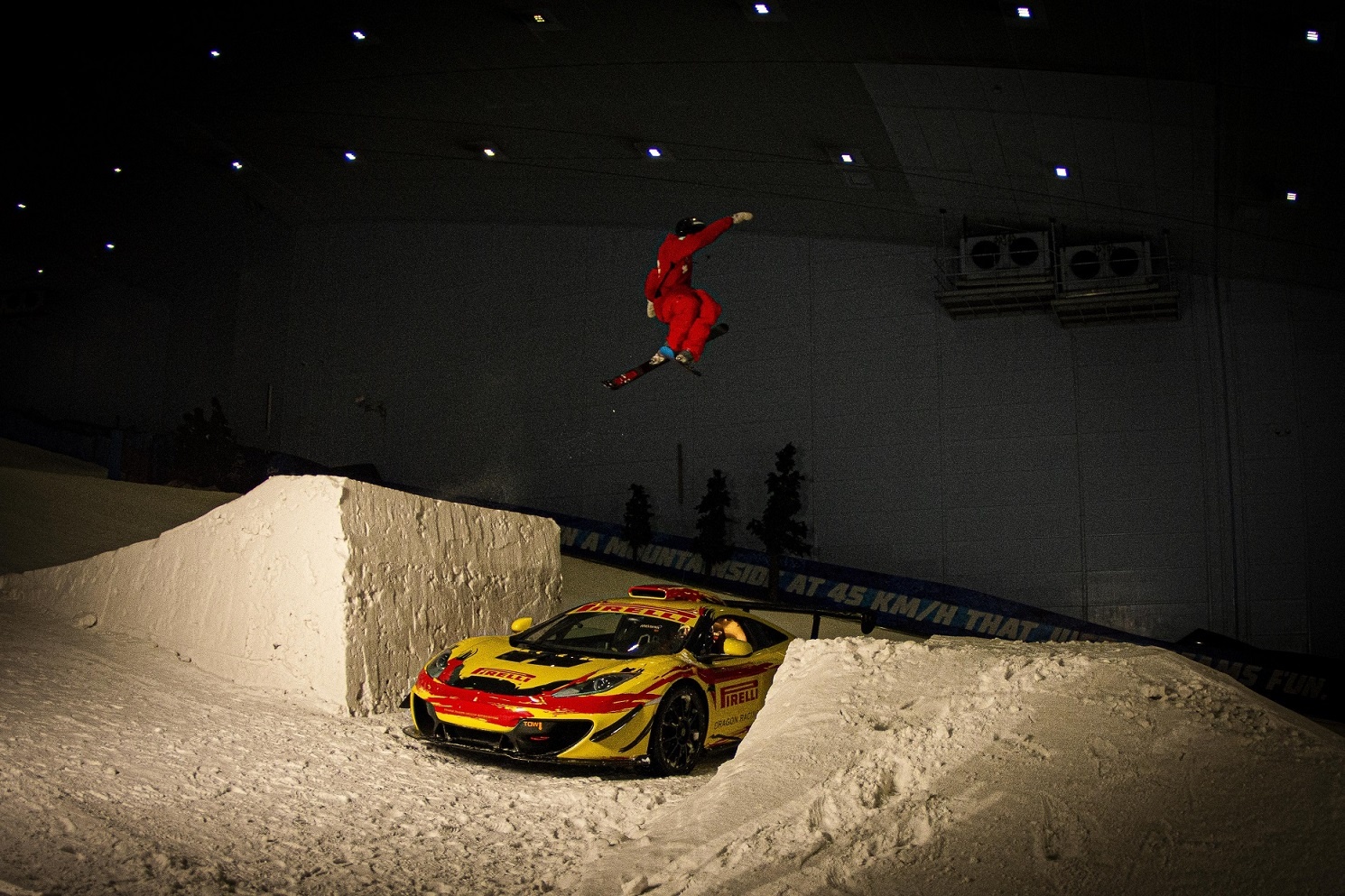 Leading tire manufacturer, Pirelli recently organized an impressive stunt at Ski Dubai to showcase the exceptional control of the brand’s winter tires. A McLaren GT Sprint that was fitted with Pirelli’s special winter compound tire zoomed up the 85-meter high ski slope at Ski Dubai. A skier executed a thrilling jump over the supercar, to showcase the incredible control the vehicle had thanks to its tires even in inhospitable conditions.

Pirelli prides itself upon the exceptional control offered by its tyres to drivers and the ‘Power is nothing without control’, is a campaign to highlight the crucial role played by the right tyres in providing optimum performance to high-performance vehicles.

The Dragon Racing McLaren GT Sprint fitted with the bespoke winter compound tyres had UAE driver Saeed Al Mehairi at the wheel while skier Abdullah Al Mehairi executed the hair-raising jump over the vehicle while it went full throttle on the slopes of Ski Dubai. Saeed Al Mehairi, a professional race car driver and senior driver coach at Dragon Racing, is a renowned name on the UAE motorsport circuit and a former class winner of the Dubai 24 Hour, the SWS World Karting Championship, and the UAE GT.

Alberico Avogadro, Managing Director, Pirelli Middle East, said that the initiative showcased the enhanced control, power, and performance of Pirelli’s tires even when tackling the most challenging conditions.

“Saeed Al Mehairi pushed the car to the absolute limit on the ski slope, terrain that you would not normally expect a Supercar to be comfortable on. But the car handled exceptionally well, stayed completely under Saeed’s control allowing Abdullah to execute the jump secure in the knowledge that the car would not veer off-course. That demonstrates Pirelli’s longstanding commitment to manufacturing tyres that exceed expectations under the most trying circumstances.”

Saeed Al Mehairi said that the experience of zooming up the 85-meter slope was unforgettable and an incredible experience for a passionate race-car driver like himself. “At the speed that I was driving at and the terrain on which I was operating, Pirelli’s tyres made me feel extremely secure and safe. There was a tremendous amount of grip that I was enjoying on the slippery surface, and the tyres responded very well on the snow, making the whole stunt a very memorable experience.”

Abdullah Al Mehairi, the skier who performed the feat of leaping over the car said that the adrenaline rush he experienced was incomparable. He said that he was quite nervous when he started. However, when he saw Saeed handle the car so well and saw how steady the vehicle was on the snow, he felt very confident of his ability to pull the jump off. He went on to thank Pirelli for giving him the opportunity of being part of such an unusual and exciting initiative.

Dragon Racing International, based within the Dubai Autodrome has fast-established itself as the go-to-solution for motorsport-related activity within the GCC region. Dragon Racing is the UAE’s leading Ferrari and AMG approved customer GT race team nd have been crowned the 2018 F4 UAE Drivers and Team Champions, under the name Dragon F4. Dragon Racing run retail driver experiences at both the Yas Marina Circuit and the Dubai Autodrome utilizing their top-end track cars along with the facilities provided by their class-leading workshop, storage, and tyre-fitting facilities.