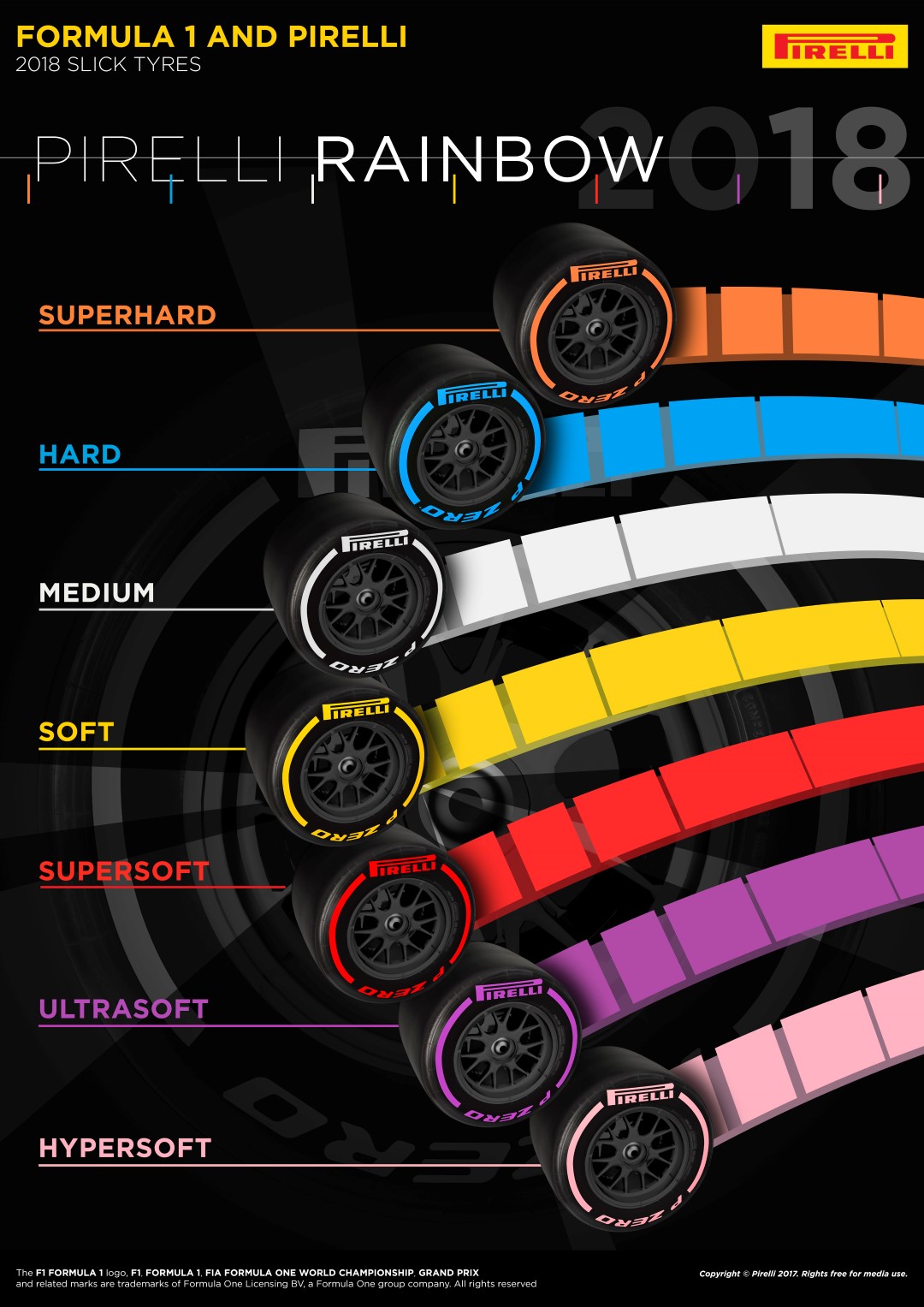 Pirelli Launches 2018 Range of Formula One Tyres in Abu Dhabi

Pirelli launched its new range of 2018 Formula 1 tyres in Abu Dhabi, adding two extra compounds and colours for next year, in addition to new compounds, constructions, compounds and working ranges. The highlights of the new Pirelli range of Formula One tyres are as follows:

• The range comprise the fastest tyres in Formula 1 history as they are made of softer compounds.

• There is a completely new tyre made of a supersoft compound called the P Zero Pink hypersoft. This tyre has a pink shade and is described as the softest Formula 1 tyre that Pirelli has ever made. This new compound is ideal for those circuits where tyres need to have maximum mechanical grip, like Monaco.

• There will also be tyres with a hard compound, that will have an ice blue shade.

• Another notable tyre will be a superhard tyre, which will be orange to symbolize that it will be the hardest tyre in the 2018 range.

• There will be a total of seven slick P Zero compounds, which along with the new Cinturato intermediates and wets will expand the 2018 range to nine brightly-coloured Pirelli tyres.

• In tune with Pirelli’s philosophy of renewing the range every year from the time it became the exclusive supplier to Formula One in 2011, the compounds and constructions have been redesigned for each tyre.

• There are new working ranges across the entire family as well. This factor as well as the wider range of compounds that are available means that teams will be able to choose tyres that are more specifically suited to each race next year giving Pirelli and the Teams greater flexibility when it come to tyre choices. Thus, the teams can come up with creative race strategies.

• The brand new pink tyre, was named the P Zero Pink hypersoft based on the results of a poll across Pirelli’s social media channels. This poll was endorsed by the sport’s leading personalities, who invited fans to choose a new name after the Brazilian Grand Prix.

Commenting on the changes for the new year, Mario Isola, Head of Car Racing said: “Compared to this year, when the tyres grew by 25% to fit a brand-new generation of cars, the changes for next year are less far-reaching. However, we’re pleased to present some important innovations with softer and faster compounds across the range: including the new hypersoft. We realised that, under the unique circumstances of this year, some of our 2017 compounds were perhaps conservative: the tyres we have created for 2018 addresses this, in line with the objective of having around two pit stops at most races. However, the fundamental design concept of the tyres hasn’t changed next year, preserving the attributes that all drivers have appreciated this year and allowing them to push hard from the start to the finish of each stint. The new range consists of faster tyres that should lead to even harder and more spectacular racing in 2018.”

After a two-day test in Abu Dhabi, the drivers belonging to the Formula One teams will have the chance to sample the 2018 tyres on next season’s cars for the first time during the two official four-day pre-season tests in Barcelona from February 26 – March 1 and March 6-9.