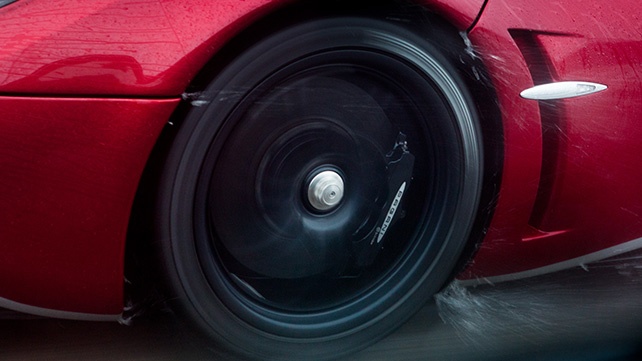 Pirelli has developed its most performance oriented road tire. The tire is a customized one that the Italian tire maker developed for a new Pagani called the Huayra Roadster BC that was launched during the Monterey Car Week in the United States.

The Huayra Roadster BC will have the new P Zero Trofeo R tire as its original fitment and will help the model to optimize the 800 horsepower and 1050 Nm of torque that the model’s twin-turbo V12 six-litre engine provides. This car has the capability to attain a top speed of over 300kph and can generate in excess of 1.9g when taking corners, with the peak lateral load being 2.2g. Hence, it needs a tire that can match this performance without undue stress.

To cope with these performance levels, the tire which will be used in 265/30 R20 at the front and 355/25 R21 size at the rear, required a completely new development path. Pagani and Pirelli collaborated by using a development process that incorporated modelling and predictive simulation. It involved the use of a computer model that could accurately replicate the dynamic characteristics of the car thus eliminating the need to make actual tires as prototypes.

This process offered the benefits of shorter lead times as well as greater alignment between objective data and subjective impressions behind the wheel. The end product was a tire that proved to be a better match for the car and marked another advance in Pirelli’s renowned ‘Perfect Fit’ strategy. The very same simulation techniques were used to develop P Zero tires for Formula 1.

The joint engineering team from Pagani and Pirelli began the development process by first deciding on the size for the front tire as they needed one that had wider channels, a bigger cord, and larger rims. The needed to have a bigger contact patch as this would translate into greater strength to support the extra aerodynamic downforce loads. The tire also needed to have a stiffer structure for better driving dynamics. There would be less sliding and hence a sharper turn-in, and less tendency towards understeer.

The higher tire size also means that braking would be better and the latest Pagani now can pull 2.2g under braking. The work on the new front tire meant that rear tire had to be revised in order to maintain the right balance between the two axles. Pirelli’s engineers modified the design of the tread pattern by changing the layout and increasing the size of the blocks as well as the longitudinal grooves. The outcome was better traction under acceleration.

The partnership between Pagani and Pirelli goes back over 10 years. According to Horacio Pagani, the Founder and Chief Designer of Pagani Automobili. one of the objectives when developing the new P Zero Trofeo R tire was for the driver to get a good feel through the steering wheel. The expertise of Pirelli’s engineers made the tire really communicative, as it is possible for the driver to know exactly when he is approaching the limit of adhesion.