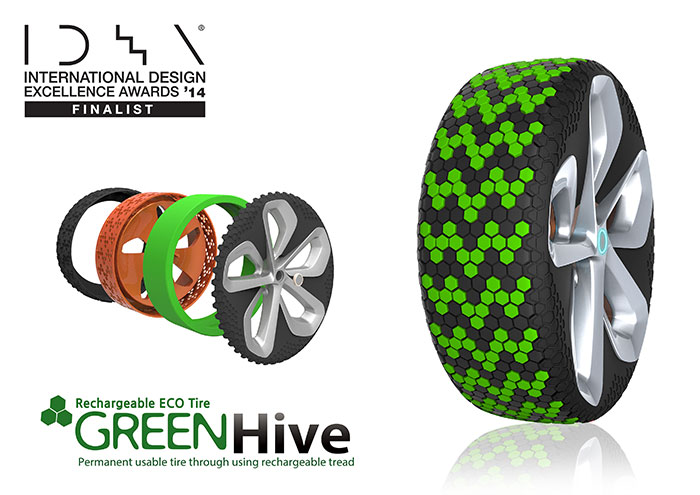 Nexen has won the prestigious Red Dot design award for its “Green Hive” concept tire. The Green Hive tire comes with a “rechargeable” tread and the idea is to allow motorists to minimize the expense by just replacing the tread when it is worn out rather than the entire tire. The tire won the Red Dot design award in the ‘Design Concept’ award category.

The Green Hive tire is a composite wheel unit with the wheel acting as a mould for the tread within. The tread compound is inserted into the wheel and through application of heat, the compound is pushed through tread shaped holes in the wheel assembly.

The Red Dot Design Award was established by Design Nordrhein Westfalen in Essen, Germany in 1955 and awards are given in the categories of product design, communication design and design concept. Winning products are showcased in the Red Dot Design Museum in Singapore.

The “Green Hive” concept tire has won numerous other awards including the 2016 Green Good Design Award, the 2015 A’ Design Award and the 2014 International Design Excellence Awards (IDEA).

Commenting on the Red Dot design award for the “Green Hive” tire, Han Min-hyun, vice-president and R&D director at Nexen Tire said that the number of awards the concept tire has won attests to Nexen Tire’s capabilities in the field of research and development. He said the company would continue to pursue innovation in its bid to emerge as a world leader in the international tire market, with the focus being on developing innovative and pioneering products through continuous research.

The Red Dot Design Award ceremony will be held on 22 September.