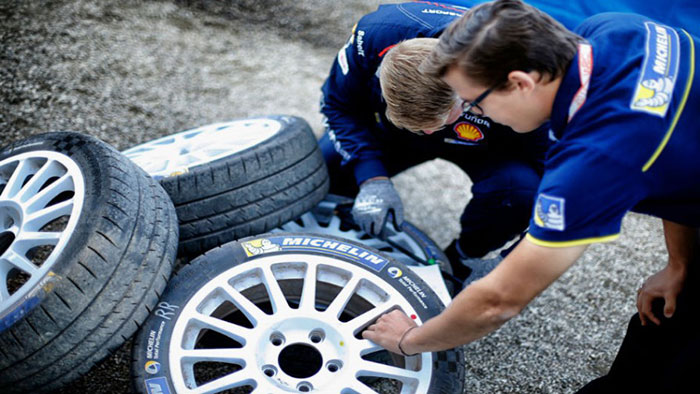 In order to minimize the very real danger of aquaplaning, Michelin has developed a new rain tire for the FIA WRC. The new tire, named MICHELIN Pilot Sport FW2 has a specific tread pattern that gives the tire higher water clearance capacity. The contact patch is twice as big and this makes it safer for crews even in heavy rain. The tire is designed to be used on asphalt rounds and the first event in which the tire will be provided to teams is the ADAC Rallye Deutschland that is scheduled to be held from August 18 to 21. This will be the first of four back to back sealed-surface events which also include October’s RallyRACC Catalunya-Rally de España.

Aquaplaning has come to the notice of the FIA (Fédération Internationale de l’Automobile) at the end of the 2015 season, and after extensive talks with the drivers, teams and manufactures, the organization had formally requested the WRC for a genuine wet weather tire for WRC races.

This caused Michelin to come up with a second-generation version of its wet weather tire for the WRC and the MICHELIN Pilot Sport FW2 (FW = Full Wet) was developed. The MICHELIN Pilot Sport FW2 tire has a high degree of grooving, with channels that pert water to the sides, thus increasing the aquaplaning threshold and giving the tire better traction and a greater degree of longitudinal and lateral grip, both when the vehicle is travelling in a straight line and cornering.

Jacques Morelli, manager of Michelin’s FIA WRC program, commenting on the new tire said that it has a higher clearance capacity than the MICHELIN Pilot Sport H5/S5, which was previously used. Its distinctive features are its narrower trade (175 mm vs 202 mm of the MICHELIN Pilot Sport H5/S5), deeper grooves (7 mm vs 6 mm), a contact patch that is double in size and a sea-to-land ratio that is 27.5 percent more than is required by even the most stringent norms. If the crews do get to use these tires in the upcoming asphalt races, they are bound to get really good results. The use of these tires is restricted to really extreme conditions, though and drivers can use only eight tires per car per rally.