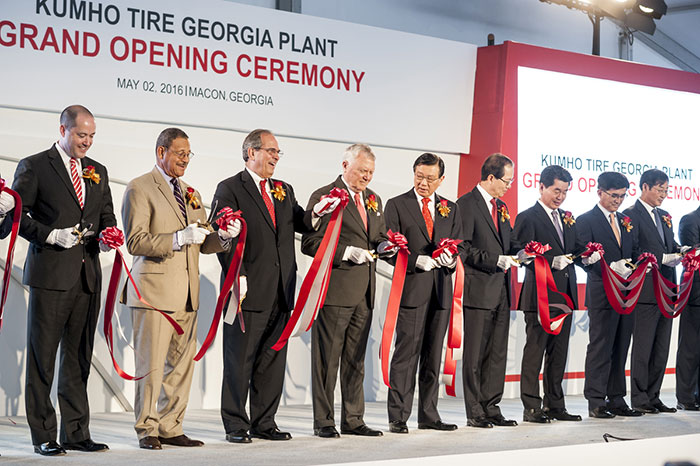 Kumho Tire Co. opened its first factory in the United States on May 2. The opening ceremony of the factory located in Macon, Georgia was attended by key executives from Kumho and local dignitaries including state, federal and local officials and included a tree planting ceremony, a tour of the plant and ribbon cutting.

Kumho had begun construction of the plant in May 2008, but suspended construction for a while due to the effect of the global recession in 2008. Eventually, construction was resumed in 2014 and the plant was ready for opening in early 2016.

Speaking at the opening of the plant, Park Sam-gu, chairman of Kumho Asiana Group, said that the new plant will help Kumho to cater better to the North American market which is one of the biggest auto and tire markets in the world and expand its presence on both a regional and global basis as part of its bid to become one of the top tire manufacturers in the world. He went on to add that the company will put an advanced management system into place to handle the day-to-day operations of the plant in an efficient manner.

When fully operational, Kumho’s factory in Macon which is covers 5.7 million square feet of land, will have an annual capacity of 4 million tires. Eventually, the plant will undergo expansion to increase this annual output to 10 million tires. The factory will specialize in 17-inch or larger tires for passenger vehicles, and about 80 per cent of the factory’s output will be used as leading auto manufacturers like Kia, Hyundai, and Chrysler.

The factory in Macon is Kumho’s third overseas production base. In addition to plants in Korea, Kumho has production facilities in Vietnam and China.