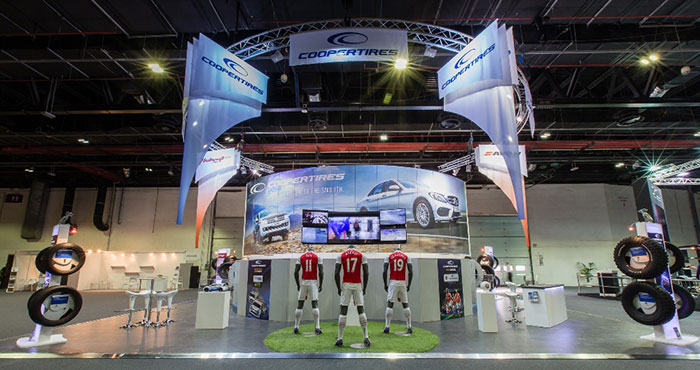 Cooper Tire Europe, the official tire sponsor of the Dubai International Motor Show 2015 used the opening day of the popular show to unveil three new tires in the region – the Cooper Zeon 4XS Sport, Cooper Zeon CS8 and the Discoverer STT Pro. The launch of the three new tires as well as Cooper’s decision to support the show in the capacity of the official tire sponsor marks Cooper’s recent drive to strengthen its presence in the Middle East region.

Speaking to the media, Jeff Schumaker, Managing Director, Cooper Tire Europe, who also oversees the brand’s operations in the Middle East said the region is a key market for the company, with its reputation as a global world leader when it comes to off-road performance tires. The company was recently in the news for launching an Arabic website, www.coopertire.me. Along with its participation in the Dubai International Motor Show, this showcases the brand’s desire to make an impact in the Middle East.

All the three tires launched at the show are notable for the use of new technologies in addition to delivering outstanding grip and handling, and this wide range makes it possible for Cooper to meet the needs of all kinds of customers.

The Cooper Zeon 4XS Sport has a new asymmetric tread pattern that has been specifically designed for supporting the weight of large SUVs. A part of Cooper’s new high performance product range, the Zeon 4XS Sport has numerous innovative technological features and benefits, like dimples for noise damping, new lightweight construction for lower rolling resistance and better steering response, and the use of a new tread compound for better grip. The moulds for Cooper’s high performance tire range too have a spring venting design for the production of high quality, cleaner tires. A new bead profile design has also been utilised on the 4XS Sport to improve the tire/rim seat interface and to ease tire fitting.

The Cooper Zeon CS8 is a high performance meant for passenger cars and offers high fuel efficiency along with exceptional grip and handling. The successor to the best selling Cooper Zeon CS6, the Cooper Zeon CS8 too incorporates a range of advanced technologies like Cooper’s Wear Square™, a visual indicator for informing drivers well in advance about tires that need to be replaced, beginning as a full square on new tires and moving through five stages to end up as an exclamation mark when it is time to replace the tire. The Wear Square can also point to uneven tire wear and possible wheel alignment issues.

Both the Cooper Zeon CS8 and Cooper Zeon 4XS Sport have a unique tread pattern featuring 3D sipes with interlocking three dimensional points for better traction, higher wet grip and reduction of heat generation while adding to the stability of the tire.

The tire that is expected to make the maximum impact in the region is the new Discoverer STT Pro, which is the next generation of the popular off-road Discoverer tire line. It is meant for off-road adventure trips with its treadwear to handle the toughest terrain and ability deliver high levels of traction and toughness. At the same time, it is just as suitable for on-road journeys with a new silica-infused tread compound that improves traction in day-to-day traffic.

The Discoverer STT Pro provides superior reliability and durability with Armor-Tek3 construction that adds strength to the sidewall and tread area, making it the ideal partner for an off-roading adventure. In addition, the tire also has lower rolling resistance for improved fuel mileage.

All the three tires that have been launched at the Dubai International Motor Show are now available on a retail basis from the company’s regional dealers across five Middle East countries.