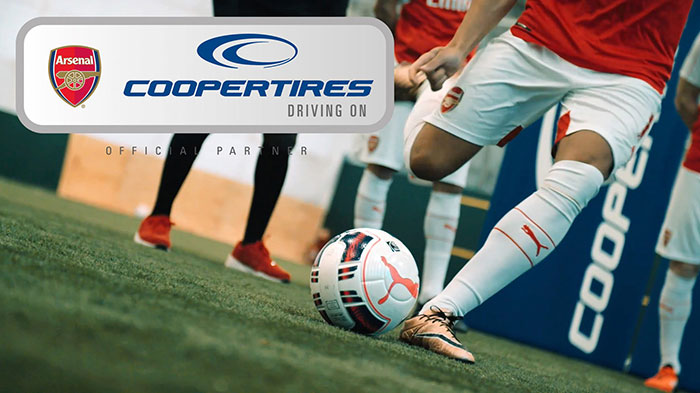 Football is a game that has a huge fan following on a global basis. Many tire companies have signed partnership deals with football teams as part of their bid to increase brand awareness. A few such instances include Apollo’s deal with Manchester United, Toyo’s tieup with AC Milan and Continental’s support for the 2014 FIFA World Cup. Cooper Tire Europe, which also oversees the company’s activities in the Middle East is the ‘Official Tyre’ partner of the highly popular Arsenal Football Club, and has now released a new video in which the company tests the accuracy of the Arsenal players with a Precision Challenge.

In the video, Arsenal players, Alex Oxlade-Chamberlain, Mathieu Debuchy and Kieran Gibbs take part in a highly competitive test in which they have to strike a ball in and through a moving Cooper Zeon 4XS Sport. The Cooper Zeon Sport is the latest tire Cooper has developed as a high performance tire for SUVs.

The challenge was definitely not an easy task for the players and it was the Arsenal defender Gibbs,who managed to claim victory in the challenge with three successful strikes.

Cooper Tire Europe has a multi-year sponsorship deal with Arsenal, which is currently in its second season. The partnership reflects the values the common values that both Cooper and Arsenal share – a passion for performance, and a drive for success.