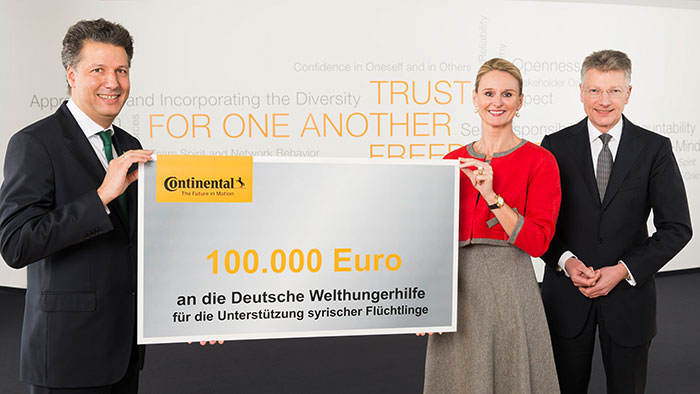 Renowned tire manufacturer, Continental donated over USD 109,815 to the Welthungerhilfe aid organization which is working actively to assist Syrian refugees. The funds for this purpose were raised through many fundraising activities held at Continental headquarters worldwide and this gesture was made as a part of the company’s corporate social responsibility initiatives and its desire to help people in need.

Speaking about the donation, Jose Luis de la Fuente Managing Director of Continental Middle East said that the company has a strong presence in the Middle East and is therefore committed to support local causes. What is notable though is that the fundraising was carried out on a global basis and such a huge amount was raised even during this period when financial hardship makes fundraising a difficult task.

Welthungerhilfe has been engaged in relief activities to assist victims of the Syrian civil war from November 2012. Iniitally, the organization focused only on Syria, but with greater inflow of refugees from Syria into northern Iraq and Turkey, Welthungerhilfe began projects to support Syrian refugees and in both Turkey and northern Iraq from its Turkish base in Gaziantep, Turkey, fro the summer of 2014.

Continental was established in Hannover, Germany, in 1871, and has emerged as a leader in the field of tire technology and development. The company is the leading OEM supplier for tires in the European tire market.