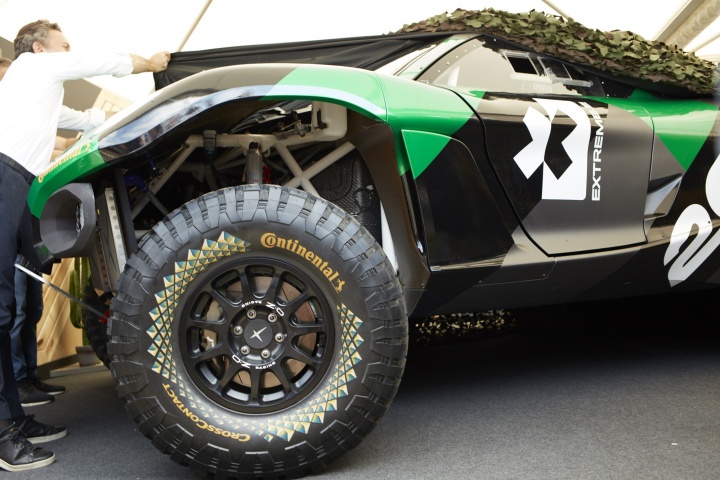 Continental has unveiled two new tire types, which have been developed specially for the off-road racing series known as Extreme E. Continental is one of the founding sponsors of the Extreme E series which involves teams of professional drivers racing specially made high-performing electric sports utility vehicles in some of the toughest terrains across the world. The races would involve 12 teams split into two groups which race in 5 locations, and the top four teams move on to the knock-out stage. As the founding sponsor, Continental provides the tires that all the teams need for this rally driving competition.

The new tires which Continental designed for this series with summer and winter tire technology made their public debut at the Goodwood Festival of Speed along with a unique electric sports utility vehicle. Continental has now made these tires available in the Middle East as well.

The drivers who participate in the series are expected to handle some of the most challenging terrains found across the globe ranging from the mountains of the Himalayas to desert dunes and the Arctic.
Karel Kucera, managing director for the Middle East and Africa at Continental, said: “At Continental, we pride ourselves as leaders in ground-breaking automotive technology and so our partnership with Extreme E comes naturally.

“With the cutting-edge tire designs that we developed for Extreme E e-SUVs, we guarantee perfect grip for acceleration, braking and precision handling on the toughest tracks.”

All teams which participate in Extreme E are expected to use the same set of standardized equipment, which is created and assembled by motorsport manufacturer Spark Racing Technology. The vehicles are equipped with a battery manufactured by Williams Advanced Engineering, while Continental provides the tires for the vehicles. Each team will get two sets of winter and summer tires which have been optimized to maximize the safety and performance of their individual electric SUVs and will be custom built. The race series is scheduled to commence in 2021.

The two new tires are designed for tough driving conditions.

“The Extreme E-SUV Odyssey 21 is unlike anything else in motorsport. The cutting-edge technology, and the tire design that Continental has developed has resulted in a stunning car capable of the highest performance in the toughest and most varied environments on the planet,” said Alejandro Agag, founder and CEO of Formula E.

“We are providing the drivers with very high grip for acceleration, braking and precision handling on what will be very demanding tracks and trails,” said Tansu Isik, head of marketing, EMEA, at Continental. “The tires will be perfectly adapted to the electric SUVs in this series, so as to ensure the best possible vehicle control and safety.”