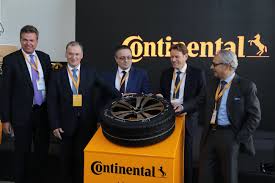 Five years after Continental’s plant in Kaluga, Russia became operational, the company celebrated the production of 10 million tires at the facility. The company officially celebrated the milestone on 11 April with a grand event to which government officials, customers and representatives from the Continental Executive Board were invited.

Speaking at the ceremony, Nikolai Setzer, Executive Board member and head of Continental’s Tire Division said that the greenfield facility has turned into a mature plant that is a success story for Continental. The plant is a key part f Continental’s Vision 2025 – the strategy of the Tire Division with growth, value creation and excellence as its cornerstones.
The foundation for the Kaluga tire plant was laid in 2011 and it started production in 2013. The plant crossed production of one million tires in 2014 and within just four years is now celebrating the 10 million mark.

Seltzer went on to thank all those who contributed to the plant’s success as they managed to maintain the growth pace of the plant in a complex and dynamic environment, all while delivering excellent products.

The plant in Kaluga specializes in a wide range of passenger and light truck tires, as well as OE tires for customers in Russia as well as in the EMEA and APAC regions. Continental is also focusing on expanding its collaborations with car manufacturers. All the tires made at Kaluga meet ISO/TS 16949 quality standards and the plant began production of 21 inch tires in March 2018. The Kaluga facility makes tires under the Continental, Gislaved and Matador brand names.