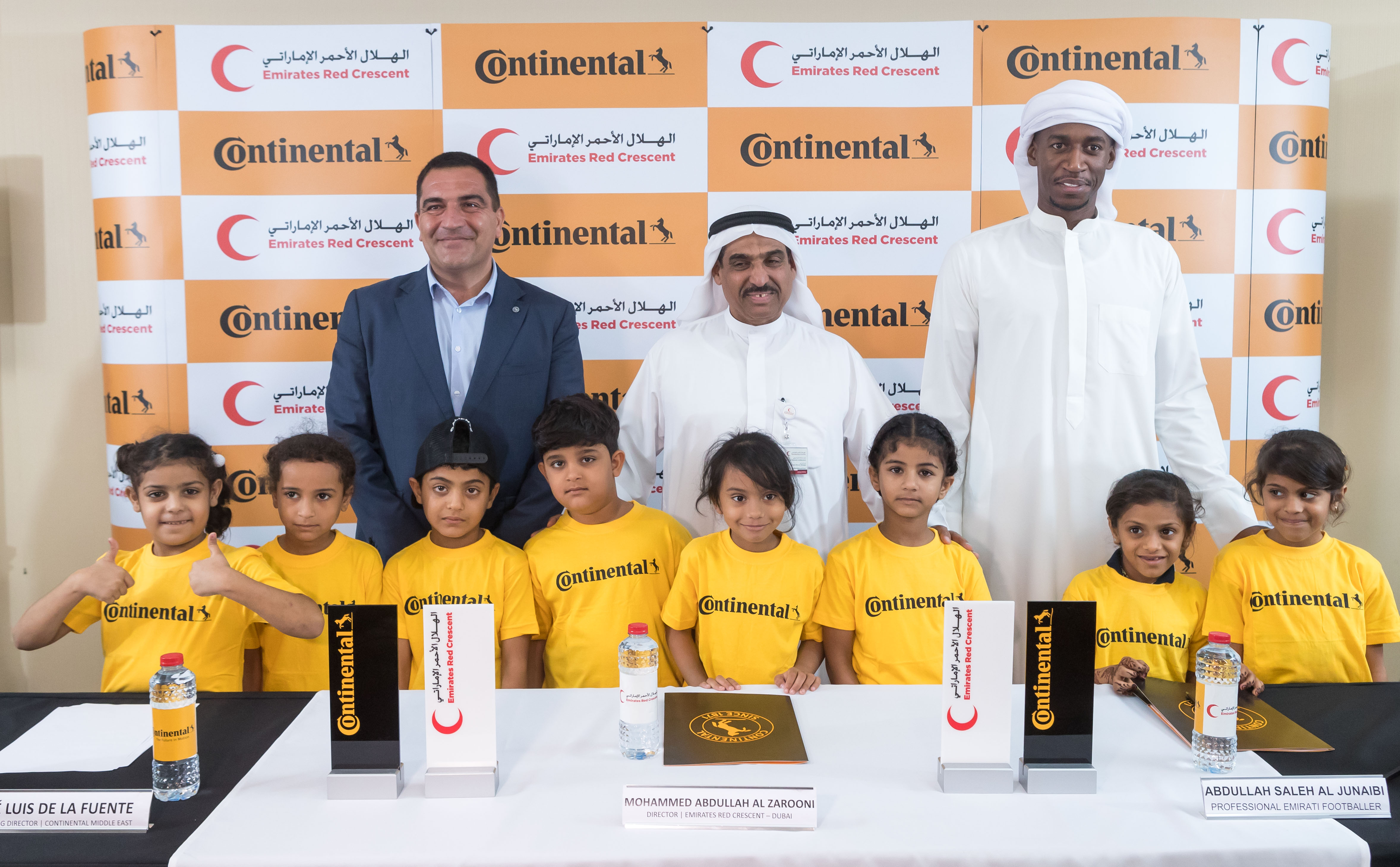 Continental, the renowned tire and automotive manufacturer, has teamed up with Emirates Red Crescent and renowned Emirati football star Abdullah Saleh Al Junaibi to give a few lucky underprivileged children from across the UAE a chance to become official mascots at the AFC Asian Cup UAE 2019. They will be able to escort some of the renowned stars of Asian football onto the pitch at the games which are scheduled to be held in the UAE from 5 January to 1 February 2019.

From the list of families that are registered with the Emirates Red Crescent in the UAE for support, a shortlist of 200 names of underprivileged children ranging in age from six to nine years will be prepared. This list will be further reduced to 88 children through an exclusive knockout event that will be conducted by football star Abdullah Saleh Al Junaibi in November. While 22 youngsters will be lucky enough to participate in the Final itself, other lucky winners will act as mascots at three first round matches which will feature the national teams of Saudi Arabia, Lebanon and Qatar. A total of 88 boys and girls will be split among the four designated matches where they will walk out hand-in-hand with some of Asia’s leading players. The finals are scheduled to be held at Zayed Sports City Stadium on 1 February 2019.

The partnership was announced at a press conference that was held today at Emirates Red Crescent’s Headquarters in Dubai. The event was attended by key officials including Abdullah Al Haj Al Zarooni, Director of the Emirates Red Crescent – Dubai branch and Jose Luis de la Fuente, Managing Director of Continental Middle East. Al Wasl FC footballer, Abdullah Saleh Al Junaibi who will make the final selection of the children was also present at the press conference. Faisal Khalil, the retired Emirati football superstar was also in attendance to offer his support for the campaign.

Commenting on the campaign, Jose Luis de la Fuente, Managing Director at Continental Middle East said that Continental has been associated with the leading football events in the world for many years, and with the company being a sponsor of the upcoming AFC Asian Cup UAE 2019, it wanted to give young football fans in the region a chance to have unique experiences. He said that in the ‘Year of Zayed’, the company felt that it would be appropriate to do this through a nationwide campaign that would provide underprivileged children in the UAE with a truly unforgettable experience for. He went on to thank both Emirates Red Crescent and Abdullah Saleh Al Junaibi for their support.

Mohammed Al Zarooni, General Manager of Emirates Red Crescent – Dubai Branch, said: “We were delighted when Continental came to us and asked us to be a part of this fantastic initiative. Football is a great way to spread happiness among children, and this is particularly important for the youngsters who we work with and support and who don’t have access to the same opportunities and lifestyles that most of us enjoy.”

Renowned football player, Abdullah Saleh Al Junaibi said that he was honored to be part of such a worthy initiative. He spoke about how excited and proud he was to watch his national team play when he was a child.

Al Junaibi said, “I can imagine how thrilling it will be for these deserving children to walk out alongside the region’s top football stars in front of thousands of cheering fans at the stadium and millions more watching at home on TV.”

Continental started its association with football in the 1990s. In addition to being the Official Sponsor of the AFC Asian Cup UAE 2019, the company’s sponsorships included involvement with the FIFA World Cup, the UEFA Champions League (1995-2000), the UEFA European Championship (2008, 2012 and 2016) and Major League Soccer in the United States and Canada. It also sponsored both the 15th and 16th editions of the AFC Asian Football Cups in 2011 and 2015 which were hosted in Qatar and Australia respectively.