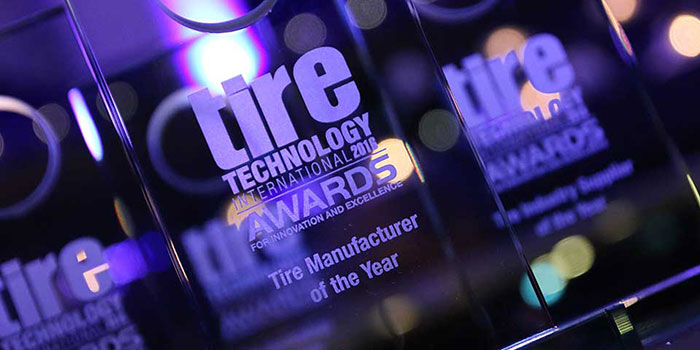 Bridgestone emerged as a major winner when the 2016 winners of the Tire Technology International Awards for Innovation and Excellence were announced at a ceremony held during the Tire Technology Expo 2016. These awards were the highlight of the 16th edition of the fair which was held in Hanover this year. Over the years, the fire has become one of the leading events related to tire manufacturing technology in the world with over 250 exhibitors showcasing the latest tire manufacturing technology and materials in this year’s event.

Bridgestone bagged the coveted Tire Manufacturer of the Year award, on the basis of its increasing focus on research and development (R&D) and sustainable manufacturing. This was the fifth time Bridgestone picked up an award at this event, narrowly beating competitors like Cooper Tire, Nexen and Goodyear. The company is winning the Tire Manufacturer of the Year Award for the second time, and had last won it back in 2008.

Commenting on the award, Eduardo Minardi, executive chairman, Bridgestone EMEA said, “Everyone in Bridgestone is hugely proud to receive this recognition. R&D and innovation lie at the heart of all our activities; it is the only path that can lead us to a sustainable future.”

Graham Heeps, editor, Tire Technology International magazine and chairman of the independent judging panel drawn from tire industry experts said that Bridgestone had displayed initiative to work on the process of producing natural rubber from guayule.

The company has also drawn up plans to reorganize its research and development activities to allow for a greater level of collaboration with external companies. Bridgestone was quick to recognize that an inward-looking approach will not work in the future as future tires will demand innovations from outside the traditional tire industry, with the focus being on materials and electronics.

Kobe Steel won the Tire Manufacturing Innovation of the Year award for its 5THR tangential mixer rotor that makes it possible for existing tangential mixers to be converted to silica-rich compounds, without having to replace them with intermesh mixers. Commenting on the award, Yasuaki Yamane, deputy general manager machinery business, Kobe Steel Co Ltd said that it took more than six years to verify the rotor’s performances with lab equipment, computer simulation and production-size machines. The rotor is already being employed at the production level and has met performance targets.

Nokian Tyres won the Tire Technology of the Year award for its pathbreaking Hakkapeliitta R2 155/70R19 winter tire. The tire is used as the OE fitment for the BMW i3, and received an EU label ‘A’ grade for rolling resistance, the first time a winter tire made this grade. According to judge Saied Taheri, director of CenTiRe, Virginia Tech, the tire’s technology combined two of the most difficult-to-optimize functional performances of the tire, making the tire a unique product. This tire will give the growing tribe of electric car owners higher levels of winter grip, more peace of mind and more range.

The Environmental Achievement of the Year category was given to AquaJet for its water jet rubber recycling technology. This technology can be used in the tire recycling process to convert old tires into material that can be reused in tire manufacture. The other contenders in this category included Cooper Tire’s advances in guayule natural rubber, Carbon Clean Tech’s recovered carbon black and the SAM-T dosing system from ColorService.

Mesnac won the Tire Industry Supplier of the Year award, due to its R& D focus and the pioneering work it did in the manufacture of smart tires. Mesnac was the runner-up in this category for the previous two years.

The winners received their awards at a gala dinner held at Hannover Congress Centrum, Germany during Tire Technology Expo on 17 February 2016. Two additional categories were announced on the night, recognizing the winner of the Young Scientist Prize plus the Lifetime Achievement Award, which was presented to Prof. Jacques Noordermeer of the University of Twente.