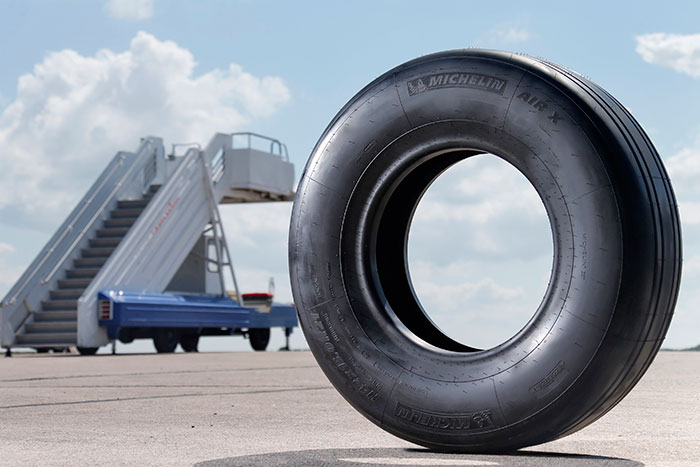 Michelin tires have been chosen as the sole OE fitment for the main landing gear for three types of Boeing aircraft – the 777-200LR (Long Range), the 777 Cargo and the Boeing 777-300ER (Extended Range). These tires will be used on the final assembly line for all three types of aircraft from July 2016. The Boeing 777 is a long-haul plane that can carry upto 400 passengers for distances as long as 7,370 nautical miles (13,650 km). Boeing will be using Michelin’s Near Zero Growth (NZG) radial tires which have patented technology.

The choice of the Michelin NZG tires for the Boeing planes is part of a long established relationship between both the two major corporations. In April last year, Michelin had received the “Supplier of the Year” award from Boeing. Michelin produces radial tires for a wide range of Boeing aircraft including the 737, 747, 787, 777 in addition to many military aircraft. Over the long term Michelin radial tires having NZG technology offer users longer tread life, the highest levels of safety and a lower total cost of ownership, long tread life, and the highest levels of safety.

“Michelin is proud to have been selected by Boeing as its official partner on the 777-300ER fleet” said Frank Moreau, President of Michelin Aircraft Tire Company.

The three main factors that led to the certification of the new MICHELIN Air X NZG tires are its relatively low weight which leads to cost savings when it comes to fuel consumption, higher durability translating into a 15% increase in the number of landings in comparison to the nylon radial tires that are normally used and a greater degree of reliability, especially when it comes to the impact of damage caused by foreign that can lead to the need for unscheduled maintenance.

Michelin will be making the tires for the Boeing aircraft at its plant in Bourges, France which is considered as a global hub for the manufacture of radial technology aircraft tires.