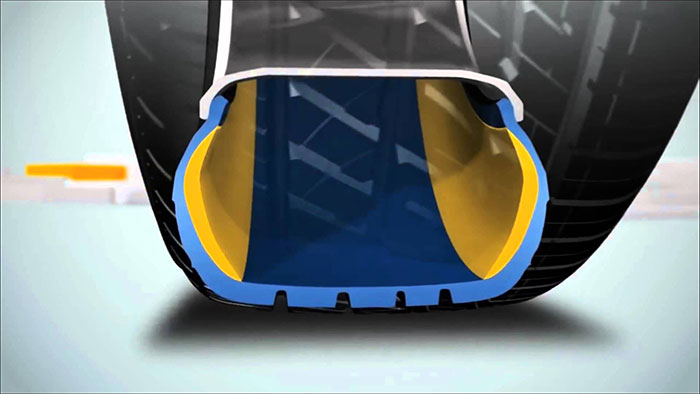 Bridgestone has launched an upgraded version of its DriveGuard run-flat tire in Europe, in order to comply with the continent’s stricter tire labeling norms. The tire comes in two variants for both summer and winter seasons and offers higher performance ratings when compared to the version that was launched in the United States two years ago. The new DriveGuard has been modified to handle tackle cornering and wet conditions in a better manner and is being positioned as an extended mobility tire as well as a premium touring tire for all weather conditions.

The main issue with most run-flat tires is that once they offer limited ride comfort. However, the DriveGuard is reinforced with a treated polyester fiber that significantly enhances ride comfort. This fiber is treated with Bridgestone’s proprietary coating material in order to reinforce the sidewall. The polyester normally has a softening point of 140 degrees C, but after being treated can withstand temperatures as high as 180 to 200 degree C which are encountered when the tire is deflated. Motorists can use the DriveGuard tire at a speed of 50 mph over 50 miles even in deflated condition. The durability and rolling resistance too have been optimized with the incorporation of a nano-filler/compound system.

Due to these factors, the DriveGuard has earned an A rating for wet grip performance and C rating for rolling resistance.
Another notable feature of the new DriveGuard tire is the use of “cooling fins” or sidewall ribbing. This draws heat away from the tire rim after the tire is punctured and thus brings down the sidewall temperatures by 20 degrees C.

For the European market, Bridgestone will be manufacturing the DriveGuard tire at its factory in Poznan, Poland. It will be available 19 sizes for the summer tire and 11 sizes for the winter version, ranging from 185/65R15 to 245/40R18.
While the summer tire will be available in most of Europe from next month, and the winter tire will reach the retail market in June. In Eastern Europe and in Scandinavia, Driveuard will be launched at the retail level only from next year due to capacity issues.

Eduardo Minardi, executive chairman of Bridgestone Europe/Middle East/Africa, said at the launch: “Our revolutionary new technology will considerably contribute to road safety and give drivers additional peace of mind and convenience while on the road.”

Generally, runflats are supplied as optimized factory fitments. However, the new tire is compatible with most cars that have tire pressure monitoring systems (TPMS) devices and such devices have been made compulsory for all new cars offered for sale in Europe from November 2014.