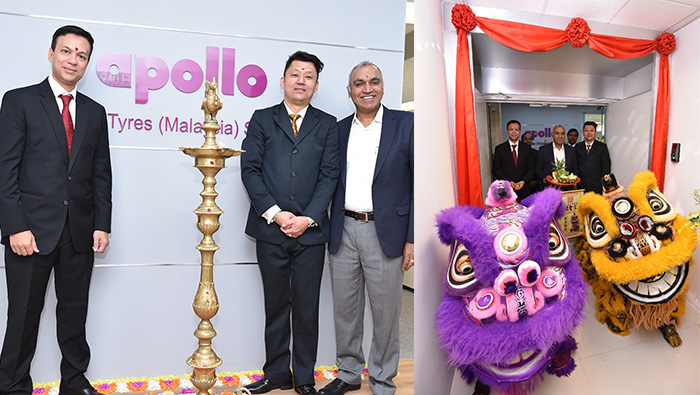 Apollo Tyres has expanded its presence in Malaysia by setting up an office in the country. Malaysia is the third largest automotive market in the ASEAN region and the tire major is set on making its presence felt in the ASEAN country after making an impact in Indonesia and Thailand. The company inaugurated its new office in Malaysia in the presence of key company executives including Satish Sharma, President, Asia Pacific, Middle East & Africa (APMEA region), Apollo Tyres Ltd and its Business Partners.

Apollo has been scaling up its presence in South East Asia after establishing a hub for sales and distribution in Bangkok. The target is to get a larger share of the replacement tire market in in Malaysia, a market with immense potential as it has an annual capacity of 580,000 truck-bus radials and 9.5 million passenger car tires. Apollo Tyres is currently engaged in forming a complete team of employees to handle sales and service in Malaysia.

Commenting on the establishment of the new office in Malaysia, Satish Sharma, President, Asia Pacific, Middle East & Africa, Apollo Tyres Ltd said that the company has been gradually increasing its presence in the Malaysian market as this has been idenfied as a key market for growth in the region. Apollo’s product range is a good fit for the requirements of Malaysian consumers and with support from its distribution and retail partners, Apollo has been able to make significant inroads into many of the key segments of the replacement tire market. Now that the company has established a foothold in Malaysia, it is the perfect time to ramp up its presence by setting up a subsidiary of Apollo Tyres in the country.

Malaysia has one of the best road infrastructures in the entire ASEAN region, and has attained a rate of over 90% radialization in the commercial vehicle segment. Apollo’s Endurace range of truck-bus radials has already gained widespread acceptance among Malaysian customers, and hence the company is keen to cement its position as one of the front runners in the truck-bus radials market. Apollo’s range of tires for passenger cars is fully compatible with the needs of almost 90% of the Malaysian car tire market, which is one of the largest in the ASEAN region.

“The setting-up of this office, and a legal entity, in addition to accelerating our revenue growth in this market, will also bring us closer to the Malaysian customers and help us better meet their requirements across the entire spectrum of applications,” added Satish Sharma.